The Volcano Dome boss can be a headache if you do not kill him on the first try. Try to follow the instructions mentioned below and you will get him at the first time:
Phase 1:
The boss will start the fight by dropping off a line of ice balls at your head. Stand between the two balls and then jump to void the shards of ice as the ball hits the ground. Once he is done, the helmeted penguins will be there on the ground, pick one up and then throw it at him. If you find it hard to hit him, just try to throw the penguin to one side and run to his opposite side. He will probably dodge the other way and in the path of the penguin projectile that you just launched. Even if this one doesn’t work, just follow him around until he stops laughing and then let him have it. 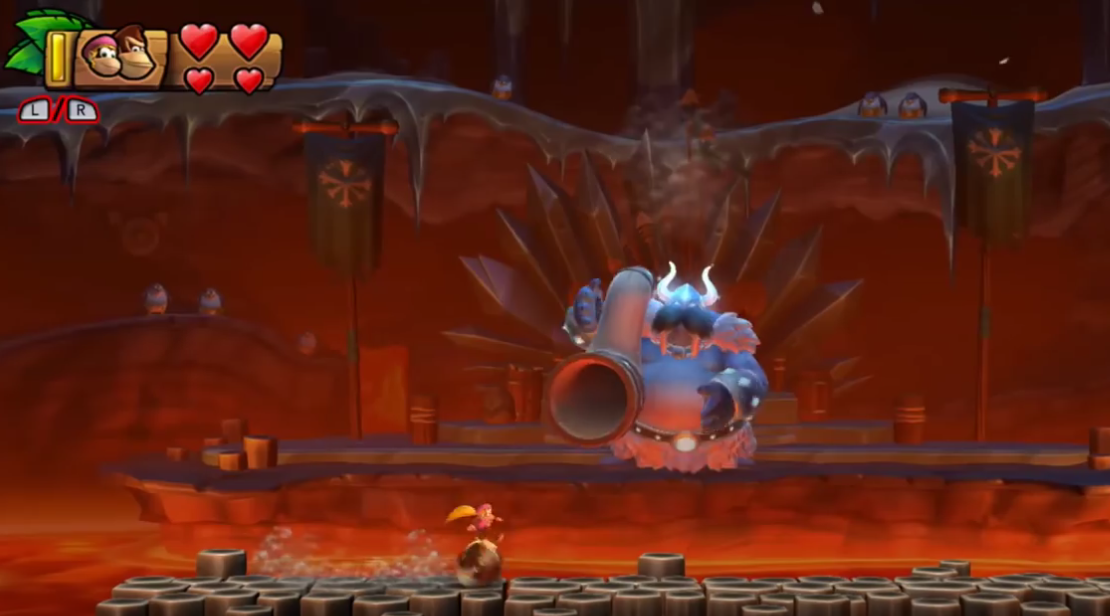 Once you have successfully hit him, he will jump to the foreground where you are standing and will charge back and forth; you will then need to jump up and then bop him on the back. Don’t touch his helmet or you will take damage. After three passes, he will jump at you for a couple of times and then the ground that is beneath his feet will sink into lava for a short time. Try to bop him three times to get to the next phase. 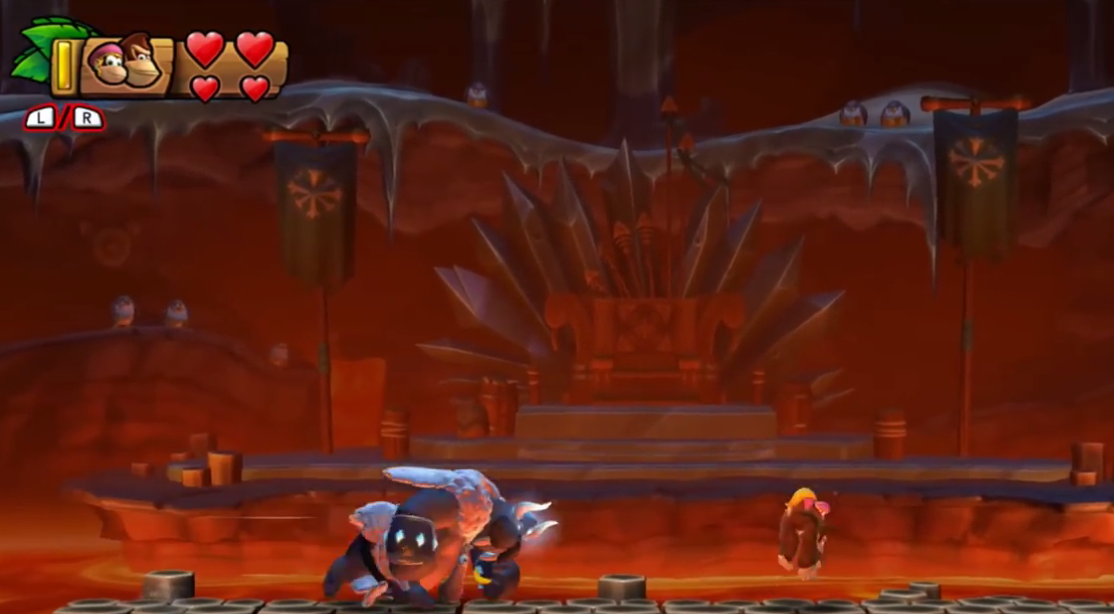 Phase 2:
He will shoot a few icicle dragons towards you. There will be a shower of icicles at the top of your screen, so move away from there to get out of the way of landing icicle dragon. Once the shower stops, the ground will be slippery with ice, so make sure to be careful or you may slide into the lava or the enemy. He will again throw ice balls at you, dodge them, pick up the penguin and throw it at him.
After getting hit by the penguin, he will jump to the foreground and will charge three times. Try to bop on his back each time and you will move on to phase 3. 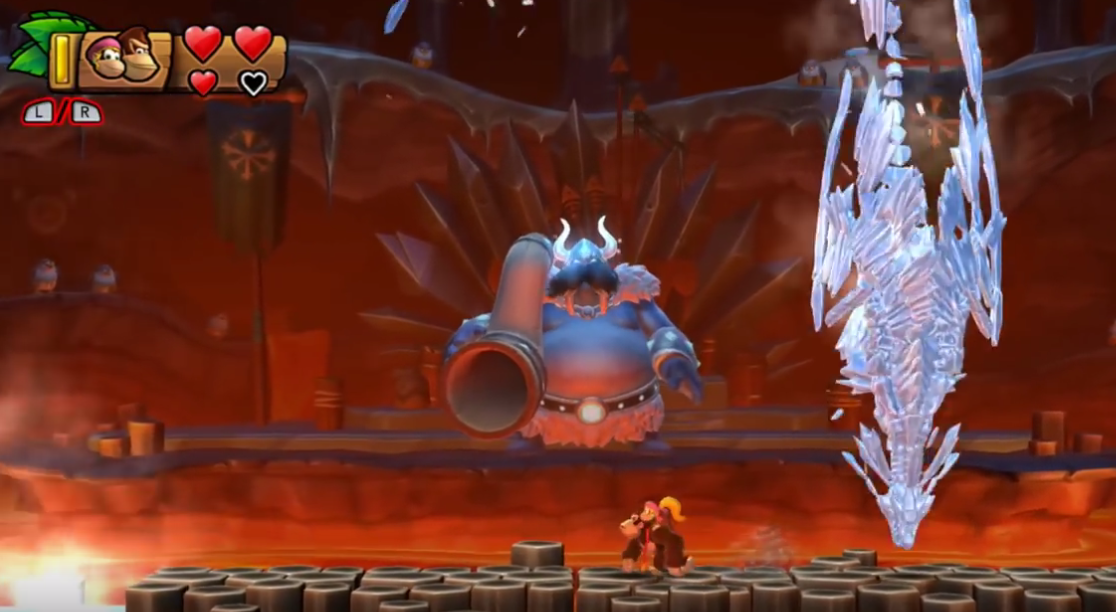 Phase 3:
He will do a butt slam on the ground causing the platforms in front of him to go up. Just note the platform that comes down first, you will jump on that one. Identify the platform that stays in the air the longer and stay on that one. When it starts to drop, jump towards the platform that was the first to drop. It should go up from lava by the time you land on it. If you get this pattern, then run to the far end and then jump back to front and the platform should emerge from the lava when you land.
The boss will jump to the background and will start to make same attacks as before. He will again drop the ice dragons at you, then ice balls with helmeted penguins. 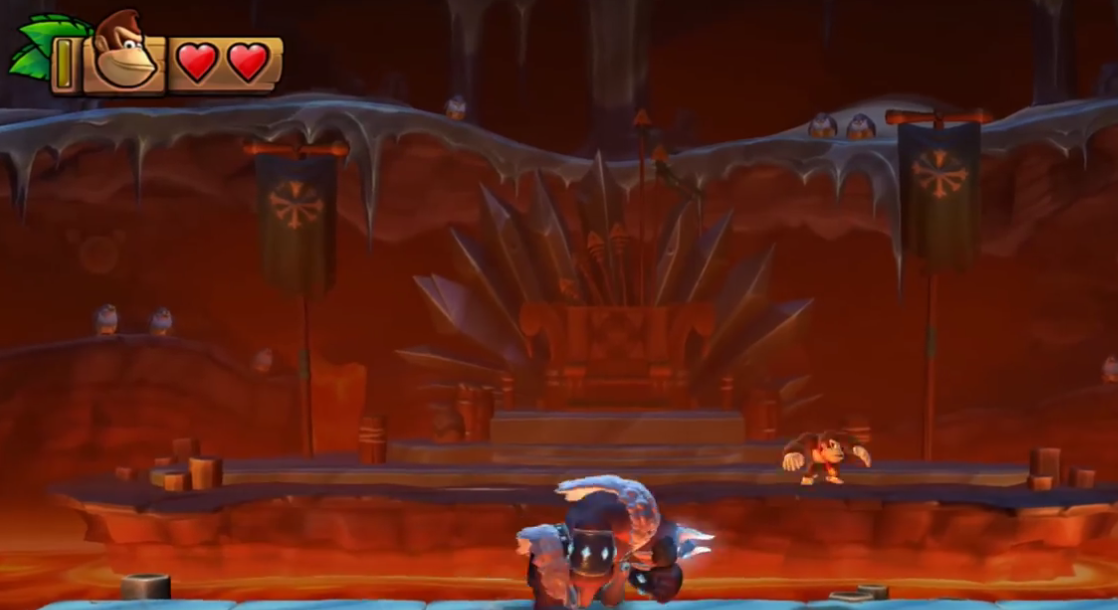 Throw the penguin towards him and he will hop forward and will charge three times. Bop him three times and the fight should get over. But if not, then he will again butt slam the ground and platforms will geyser and then he will directly shoot ice dragons at you. Duck under high ones and jump over low ones. He will then charge three times again. Try to bop him three times now and the fight will be over. If not, he will repeat the pattern again until you hit him three times.
This is all the information that you need to defeat the Volcano Dome boss. Follow the steps mentioned and you will finish him in minutes. 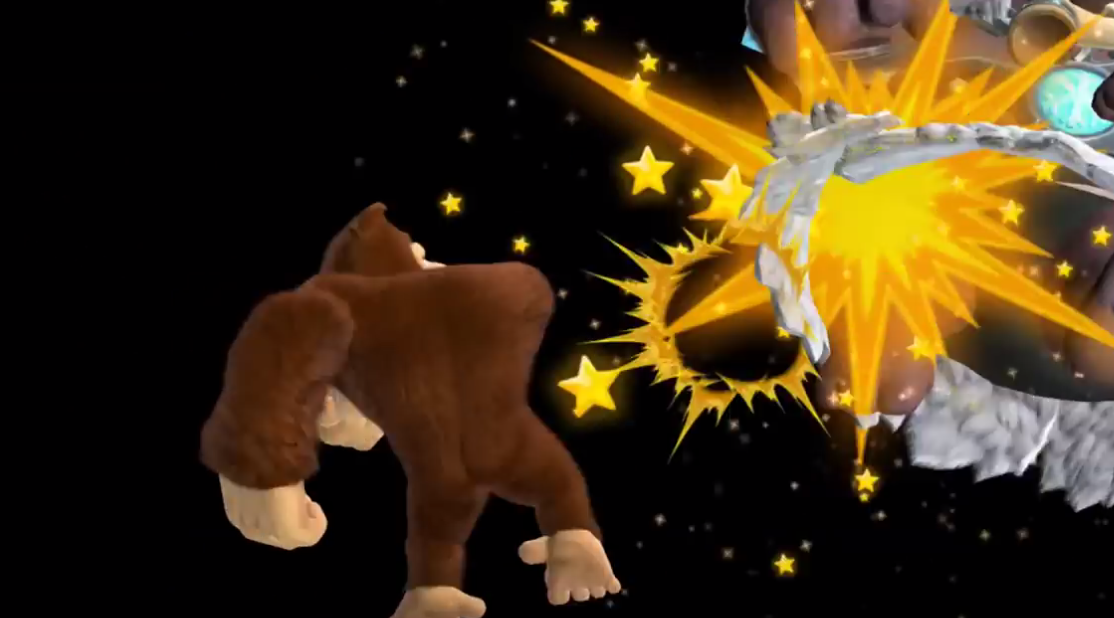