With the arrival of the Season 4, a number of changes have been made in the map of Fortnite Battle Royale. There were rumors before the season 4 that a comet will hit the map and destroy the Tilted Towers. But that didn’t happen, the comet did hit the map but instead of destroying the Tilted Towers, it created Dusty Divot. There have been a lot of other changes as well. Some new Easter eggs and secrets have been added to the map making it a lot cooler. Some of the prominent Changes in the map are given below: 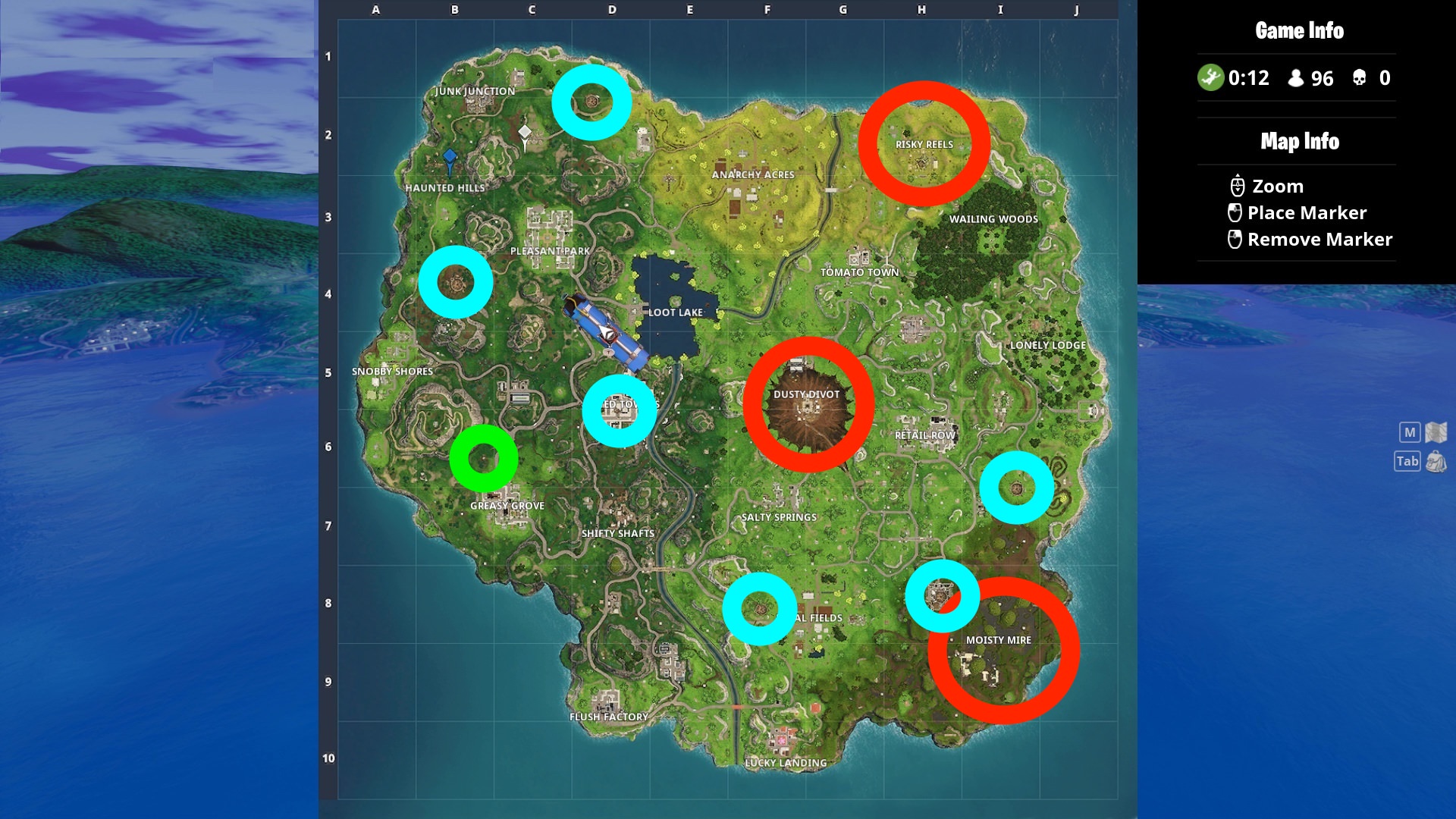 Addition of Risky Reels:
One of the two big changes in Fortnite Map is the addition of a new area Risky Reels. The area is a square lot that is surrounded by a fence. The area has cars, Lorries and crater in the middle. There are also some buildings on outskirts that are worth checking out if you are looking for loot. You will also find a giant projector screen on to the south side of the area that is partly destroyed. There is a green screen at the north side that can be used to throw images of your choice with a little know-how of chroma key. 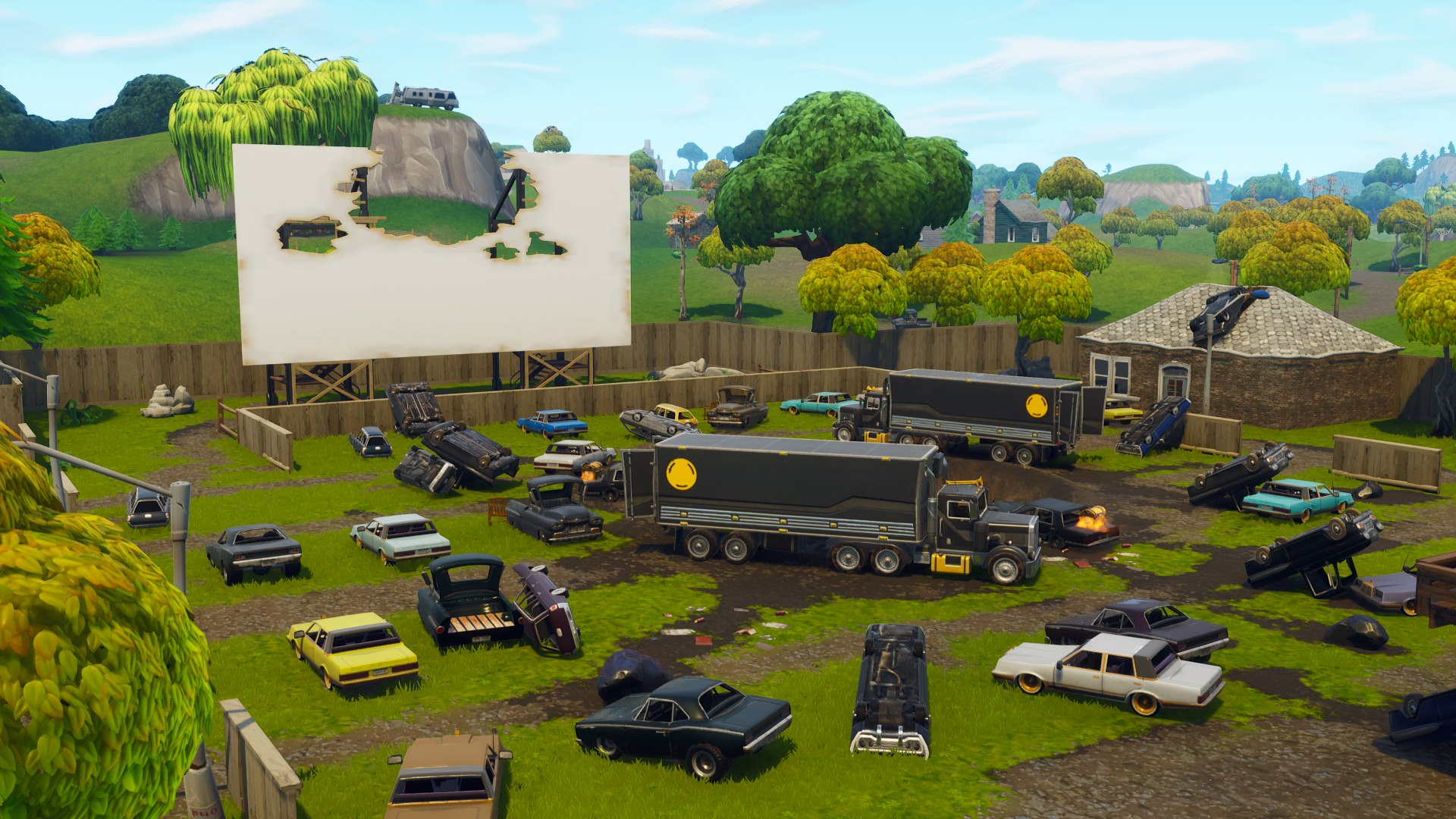 Addition of Dusty Divot:
The comet that landed on Dusty Depot has created a new area called as the Dusty Divot. It is a giant crater with a big research base at the middle. If you go its north, you will see that half of the Dusty Depot still exists with hangers that are suspended onto the lip of the crater. The research base at the middle of the crater has small while clinical rooms that contain loot and can provide you with some cover as well. There are some Hop rocks surrounding the fence that can give you low gravity for some time if you consume them. 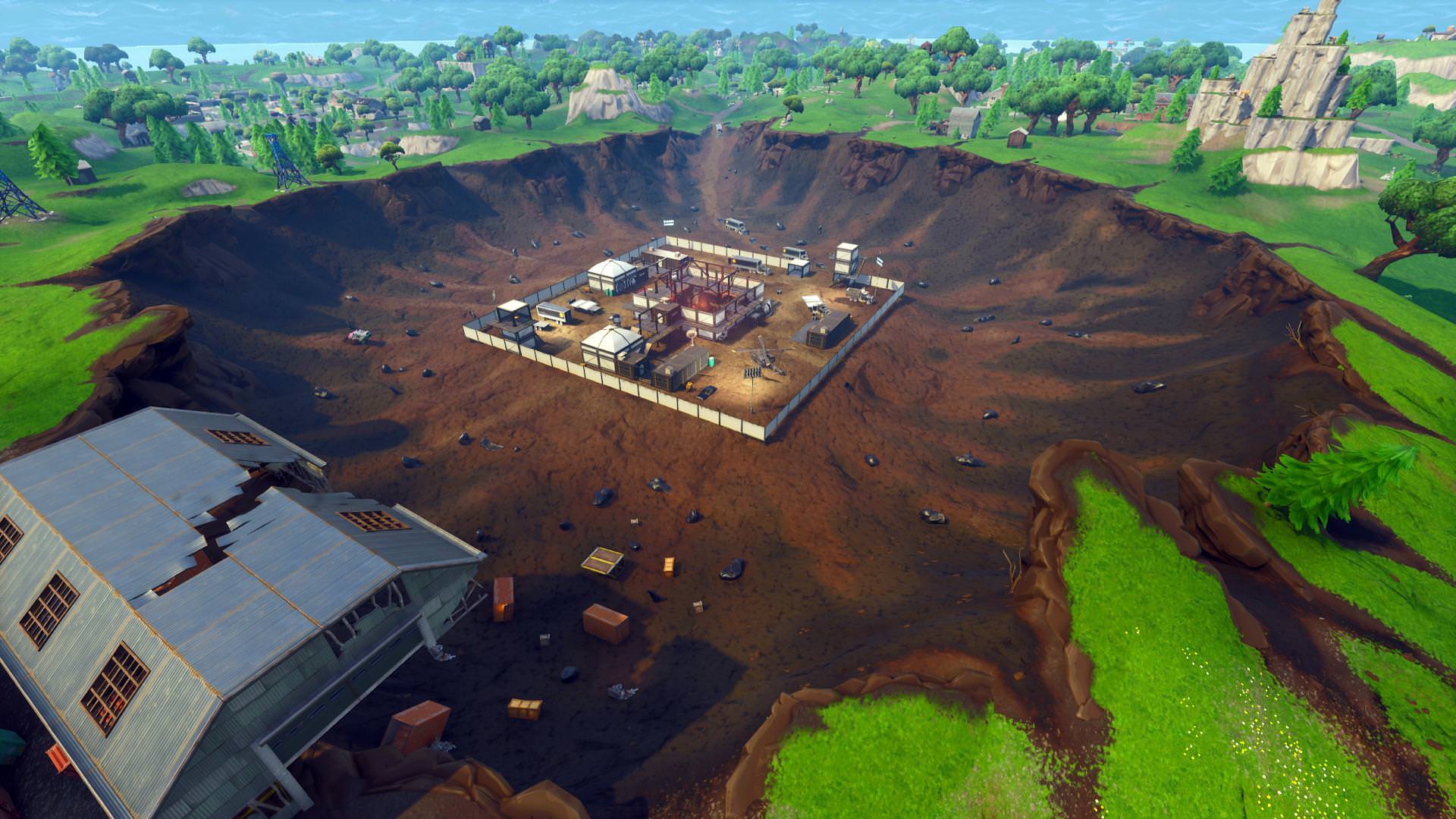 Moisty Mire Film Set:
If you go to the Moisty Mire, you will now see that there is a film set there that was not present there before the changes in the map. The area also has a helicopter and some other props as well. It also has the Fortnite letter. The film set in the Moisty Mire also has a green screen that you can use to throw images of your choice. 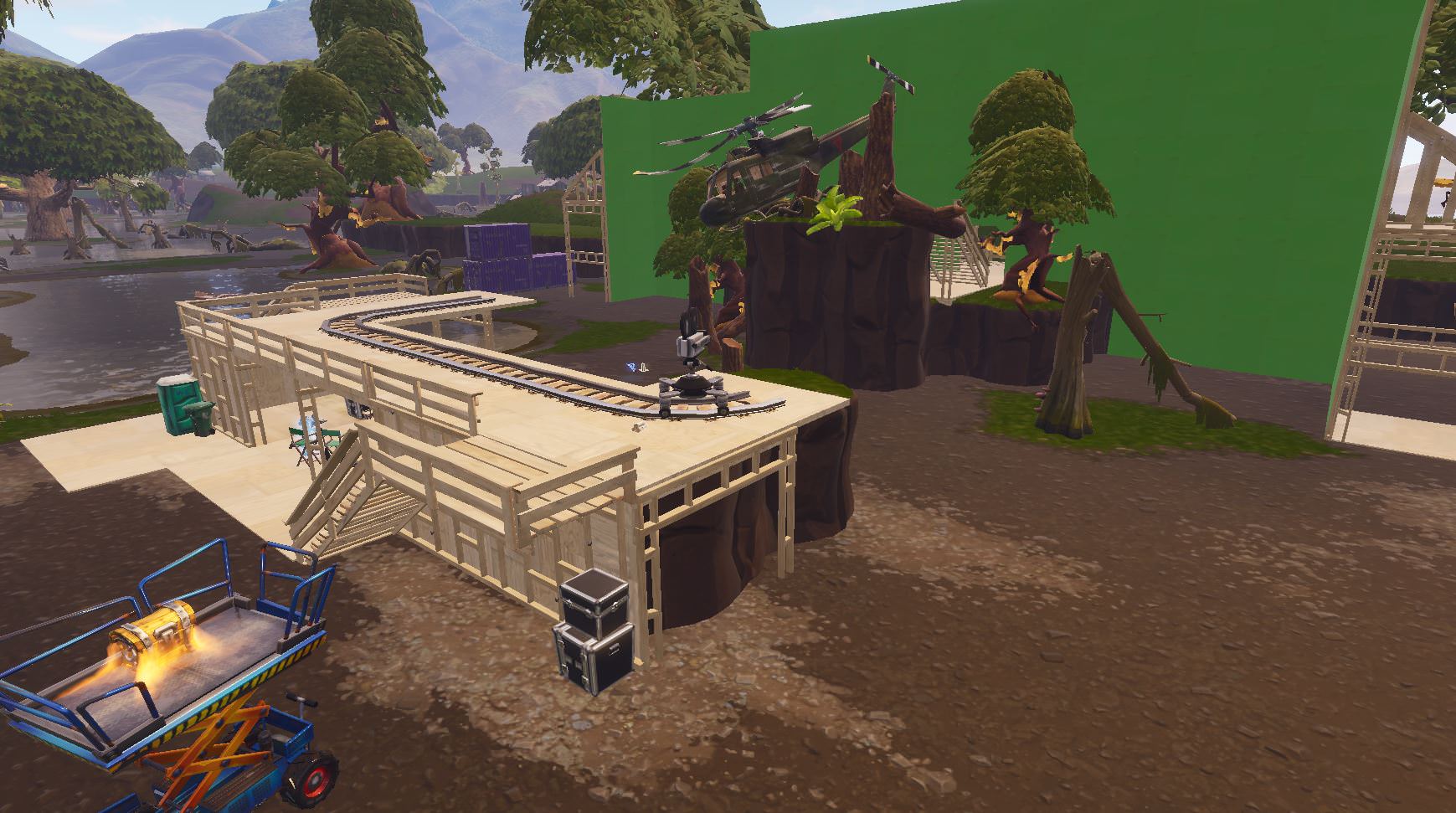 Craters:
The map also has got some craters potted all over it in different locations. These craters are visible on the map screen as well as from the battle bus. Although there is no benefit from these craters but you can use them to point out specific locations when playing with the squad. The different craters over the map are located in these areas:

Dinosaur Footprint:
As you know, the game Fortnite Battle Royale sometimes make no sense. And same has happened with this change in the map. In the modern era where there are a lot of modern guns in the game, you will get to see the footprint of an extinct species. The footprint of the dinosaur is located at the west of the Greasy Grove. Maybe it is a clue for something to come, who knows. 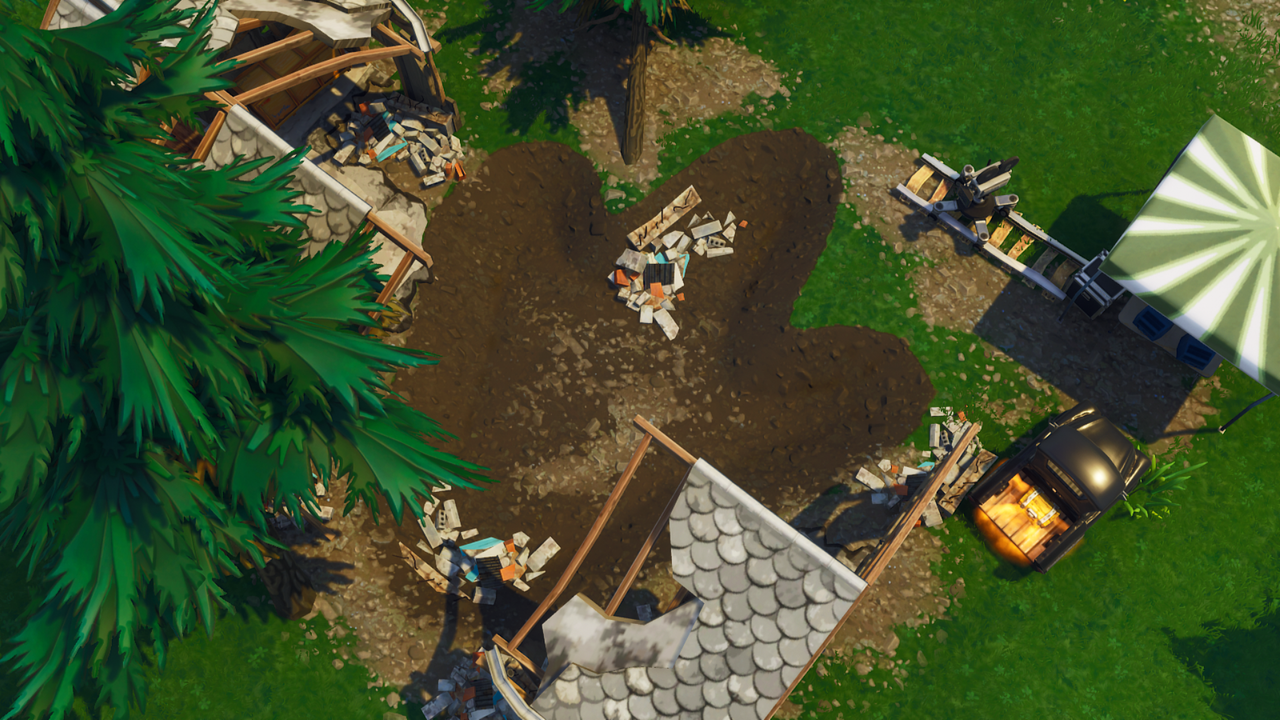 These are some of the most prominent and biggest changes in the map, there are some other changes as well but the aforementioned are the biggest ones.
M
metsopulosj
View all 136 featured items
Previous Next
You must log in or register to reply here.
Share:
Facebook Twitter Reddit Tumblr WhatsApp Email Link