So you’re thinking of upgrading your phone and you want to be in the forefront of the latest smartphone technology. But, after looking at the latest offering from Samsung and Apple you’re left feeling a little dizzy. No worries, in this comparison guide we break down the features and specifications of Samsung’s Galaxy Note 8, S8 and S+ and Apple’s iPhone X, 8 and 8 Plus to see how they stack against each other.

Hopefully, by the end of this guide, you will be better informed on each of these phones, making it easier for you to decide where to spend your cash. 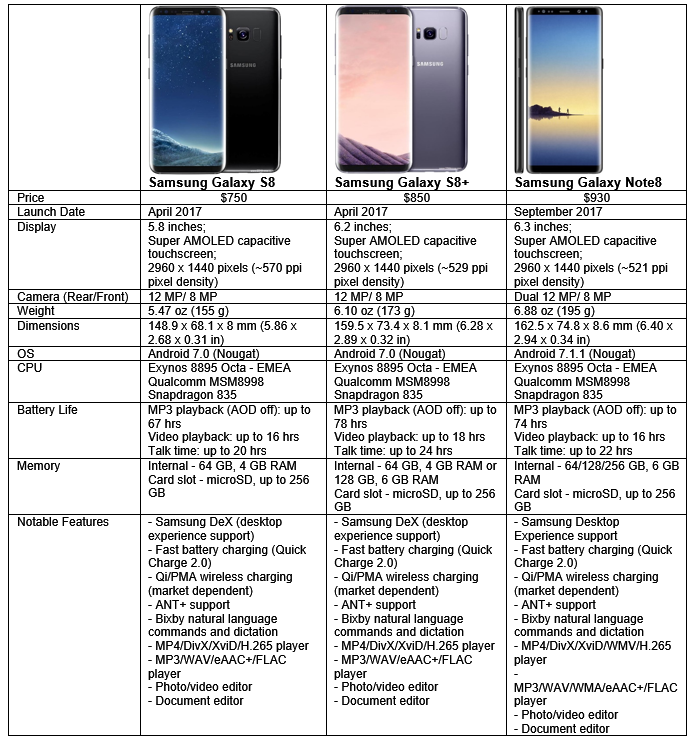 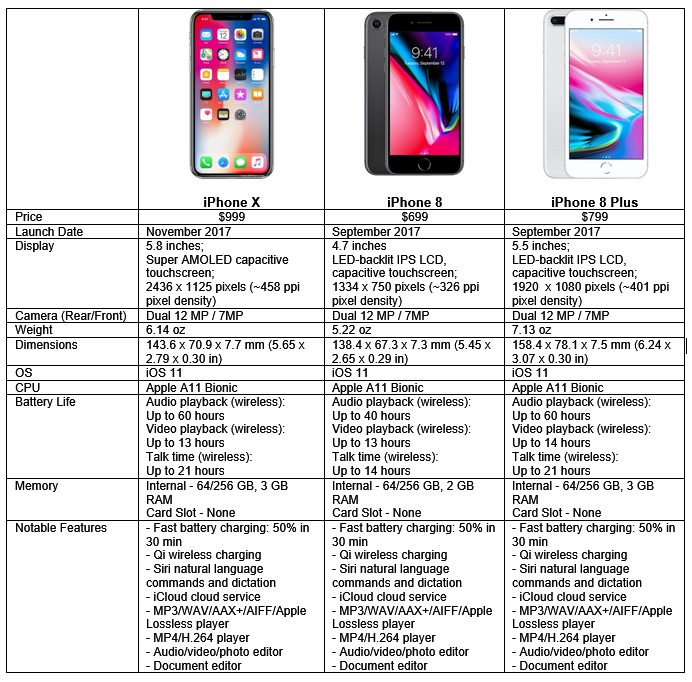 DISPLAY
The Note 8 offers the largest screen size of the bunch with a 6.3 inch screen (approximately 83.2% screen to body ratio). The S8+ comes in second with a screen size of 6.2 inches (approximately 84% screen to body ratio) while the S8 has a 5.8 inch screen (approximately 83.6% screen-to-body ratio).
All three phones boast Super AMOLED capacitive touchscreens with a stunning resolution of 2960 x 1440 pixels. This means the S8 packs a higher pixel density due to its smaller screen size, coming in at 570ppi. The S8 and Note 8 offer pixel densities of 529ppi and 521ppi respectively. Although the Note 8 has the “softest” display, the difference will be barely noticeable to the naked eye.

CAMERA
The Galaxy S8 and S8+ both have the same camera specifications and features. Both have a 12 MP rear camera and an 8 MP front camera with a f/1.7 aperture, 2x optical zoom, phase detection, autofocus and optical image stabilization. The Note 8 camera differentiates itself with a dual 12 MP rear camera with an aperture rating of f1.7 for the wide-angle camera and an aperture rating of f/2.4 for the telephoto sensor. The dual cameras offer advantages such as Dual Capture which allows simultaneous wide-angle and close-up photos. The Note 8’s front camera also features an 8 MP camera similar to the S8 and S8+.

PERFORMANCE AND BATTERY
All three phones in the Samsung lineup will carry the same Qualcomm Snapdragon 835 processor. However, the Note 8 will likely exhibit superior performance thanks to its 6GB of RAM as compared to the 4GB of RAM in the Galaxy S8 and S8+ (Note however that there is a 6GB RAM S8+ variant).
The Note 8’s 3,300 mAh battery is smaller than the 3,500mAh battery of the Galaxy S8+ but bigger than the Galaxy S8. However, despite the varying battery size, the difference in battery life between all three phones are marginal. According to Samsung’s official specifications, the S8, S8+ and Note 8 will have a talk time of up to 20 hours, 24 hours and 22 hours respectively.

SOFTWARE AND FEATURES
It is expected that the Note 8, Galaxy S8 and the Galaxy S+ will deliver very similar experiences since they all run on Android’s Nougat OS in tandem with Samsung’s TouchWiz interface. However, what set the Note 8 apart from its colleagues is the S Pen Stylus. In addition to obvious uses such as writing and sketching, the S Pen allows users to magnify areas of the screen and translate text on the fly, just to name a few. The Note 8 also allows two apps to be opened simultaneously, displaying them in split-window mode. A useful feature for multitaskers.

The iPhones have now embraced Qi-Based (wireless) charging. However, Apple’s biggest software improvement is the Face ID and TrueDepth camera system. This feature, exclusive to the iPhone X, uses infrared (IR) to illuminate your face while capturing multiple images for your face to create a 3D mapping. This 3D map of your face can then be used as a ‘biometric’ to unlock your phone and is also instrumental in Apple’s newly announced Animoji app.

SECURITY
The Note8, Galaxy S8 and the Galaxy S8+ come with rear-mounted fingerprint sensors which allow you to unlock your phone by using your fingerprint as a biometric. If you find the location of the fingerprint sensor to be a burden, the Samsung phones also include Face and Iris Scanning. With face scanning, the phone uses the front camera to store and recognize facial features to unlock your phone. Samsung, however, warns that face recognition is less secure than pattern, PIN, or password; so you will want to be mindful of that. Iris scanning uses the phone’s front-mounted camera to scan your eyes and is considered to be a more secure biometric that face recognition.

The iPhone 8 and 8 Plus will come with front-mounted fingerprint sensors on the home button, similar to their predecessors. The iPhone X sacrifices the front-mounted fingerprint scanner for more screen real estate. Instead, Touch ID fingerprint scanning has been replaced by Face ID. As mentioned before, Face ID will create a three-dimensional map of your face using the iPhone X’s true depth camera system. Face ID can be used to unlock your phone as well as authorize payments with Apple Pay.

CONNECTIVITY
This is one category where there is almost no gap between Samsung and Apple current lineup of phones. All phones offer the same high level of network connectivity and communication from Gigabit LTE, depending on carrier availability and Bluetooth 5.0, the latest in Bluetooth technology, just to name a couple.

ACCESSORIES
There are no shortage of accessories for the phones on either platform. The Galaxy line of phones will all offer a similar experience when it comes to accessory availability. One of the most notable of these accessories is the Samsung DeX (Desktop Experience) Station which allows you to use your phone as a desktop PC. Also intriguing is the S Pen Stylus which is available only for the Note 8. The S Pen, as mentioned before can be used for a variety of functions. The Samsung lineup of phones come with standard a USB-C connectivity and 3.5mm headphone jack, which means that they are expected to be compatible with a wide range of 3rd part accessories.

The iPhone lineup does not offer much in terms of innovative accessories at the moment. However, there are still a number of accessories ranging from the Beats Studio wireless headphones to wireless charging pads (now that the latest iPhones use Qi-Based wireless charging). Be mindful, though, of the iPhone’s proprietary Lightning computer bus that is used for everything from charging to listening to music. We can therefore expect 3rd party accessory use to be limited without an adapter.

PRICING
Pricing, the metric we sometimes go to first to justify a phone purchase. The Galaxy Note 8 is the most expensive of the bunch with a starting price of $930, the Galaxy S8+ comes in at $850 and the Galaxy S8 at $750. An approximate difference of $80 - $100 difference between models.

CONCLUSION
Both the Samsung and Apple roster offer the latest and greatest in terms of smartphone technology. Each has their advantages and features that make them special, however, there are many instances where features overlap or a very similar.
To be honest, you cannot lose with any of these excellent phone choices. In the end, it should boil down to the operating system you are most comfortable with (both are great), and your willingness to pay for extra features.