Sidebar Sidebar
Previous Next Sort by votes
A

My HP EliteBook 850 G1 will no longer boot without a battery, nor charge the battery. I have tested two AC adapters (both of which work on another laptop, with the same required specs). I am therefore confident that the AC adapter is not the problem. Furthermore, I have exchanged the motherboard without fixing the problem, although they both react differently to being plugged into the AC adapter:

1) The original motherboard reacted to being plugged into the power supply by blinking the Power, Caps lock and standby LEDs steadily at around 1 Hz,

2) The replacement motherboard reacts by blinking the aforementioned lights in bursts of between 3-8+ blinks in rapid succession, all-the-while the amber charging light stays lit, even without a battery attached.

I'm relatively certain that these reactions don't correspond to any blinkcodes.

I would like to note that in both cases when the battery is attached the laptop functions normally. It is bootable and has no blinking lights. Also, I can hear electrical static 'clicking' sounds coming from the motherboards corresponding to their blinking frequencies.

I just can't figure this one out. Any help would be greatly appreciated.

1) Listening by ear I am relatively certain the clicking sounds are coming from within the circled region, or close thereto: 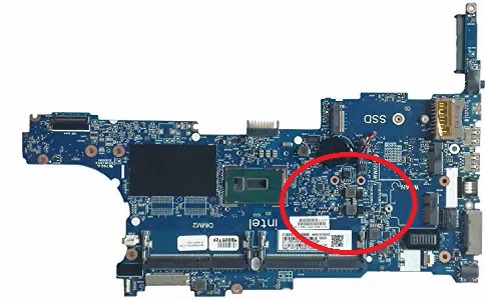 2) Power reaches the battery on both mainboards i.e. it ignites the bulb of a mains tester screwdriver.

3) I forgot to mention that leading up to this, I had problems, which may be associated. For about a month I had to fiddle with the plugger of the AC adapter. Bending it around until it would supply the power. But in this case no lights were flashing and it would still charge the battery after the fiddling. Although this sounds like a loose contact somewhere, once it started charging the battery and powering the laptop no further bending or jerking of the cable would cause it to 'loose contact'.
Last edited: Dec 31, 2020
You must log in or register to reply here.
Share:
Facebook Twitter Reddit Tumblr WhatsApp Email Link