Sidebar Sidebar
Previous Next Sort by votes
A

TL;DR: This Razer Blade's screen goes all glitchy, followed by a black screen if there is no input. 100% Hardware problem that started slowly occuring over time. Check out the images and the videos.
---------
The issues with the display started at least 2 years ago but it was only a few horizontal lines on the screen that were visible on certain colors like orange, so it wasn't a big deal. With time, they basically multiplied, some of them were more visible than others and they were everywhere on the screen. I found an image that is very similar to mine posted by someone else: 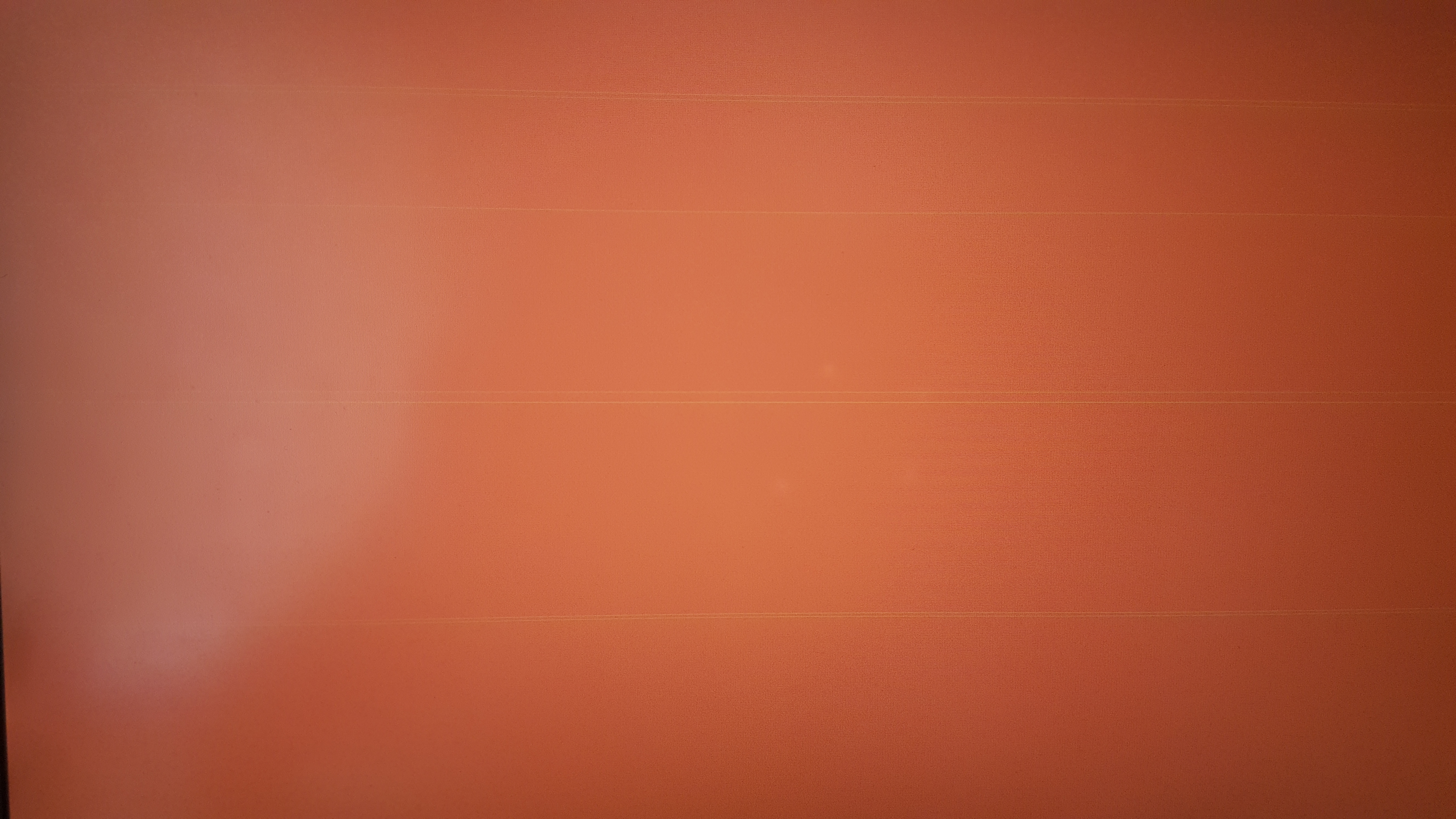 A couple of months ago I started having another issue: The screen would go all glitchy and then black unless there was something moving in the screen like a pointer or a movie playing. Though, it didn't take me long to find a solution to that, which was to hit Ctrl+Shift+Win+B, restarting the graphics driver and effectively resolving the issue. The lines were still there. It occured a few times a day but the key combination was quick to solve it, so I didn't bother much with it either. 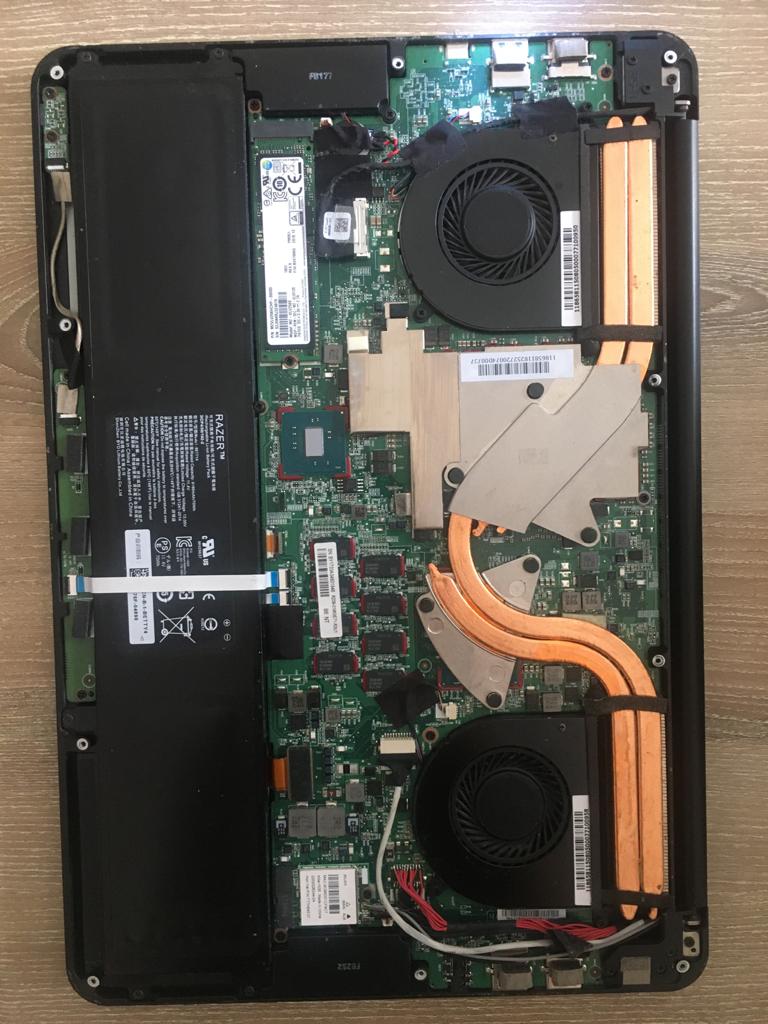 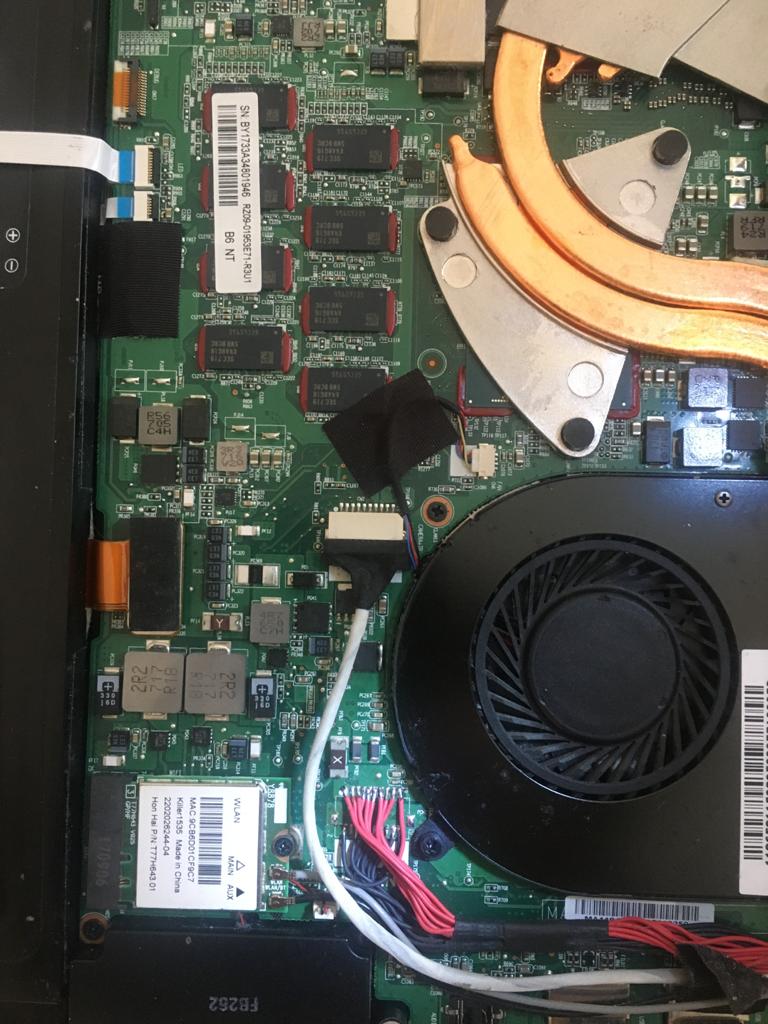 A few days ago, I saw a new line on the screen but this time it was green and thicker, which was visible regardless of the background color. Hours, or might even be minutes, later I started seeing the glitch effects, leading to a completely black screen. This time moving something on the screen or pressing keys on the keyboard did not help at all, in fact, it just brought back the glitches. I was still seeing tiny bits on the screen well enough to log in but 2 seconds after I stopped typing, the screen would go back to black. This is how it is at the moment.
Video 1
Video 2 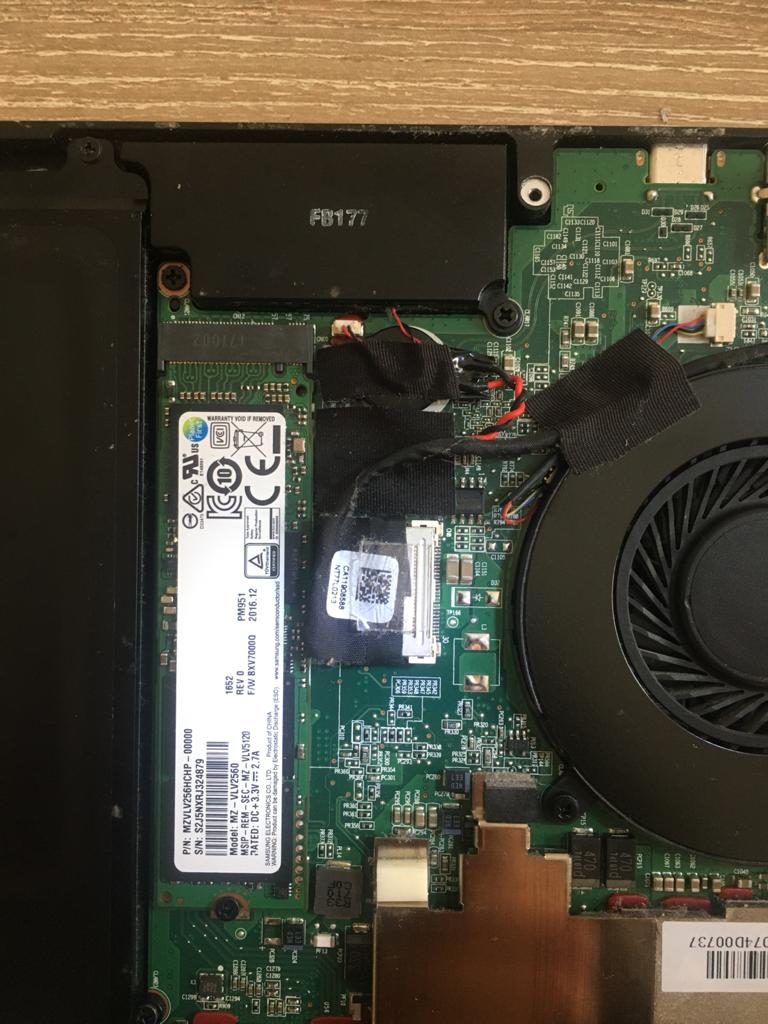 I am writing this post on my laptop plugged into an external monitor via HDMI. The screen works as expected for a few seconds after I plug it out, but it soon goes back to its faulty state. I can confirm that it has to do with either the laptop's screen or the Intel GPU (which I doubt) as I don't see any lines when I connect it to an external display and I still had the same issues on both Windows and 2 different Linux distributions. 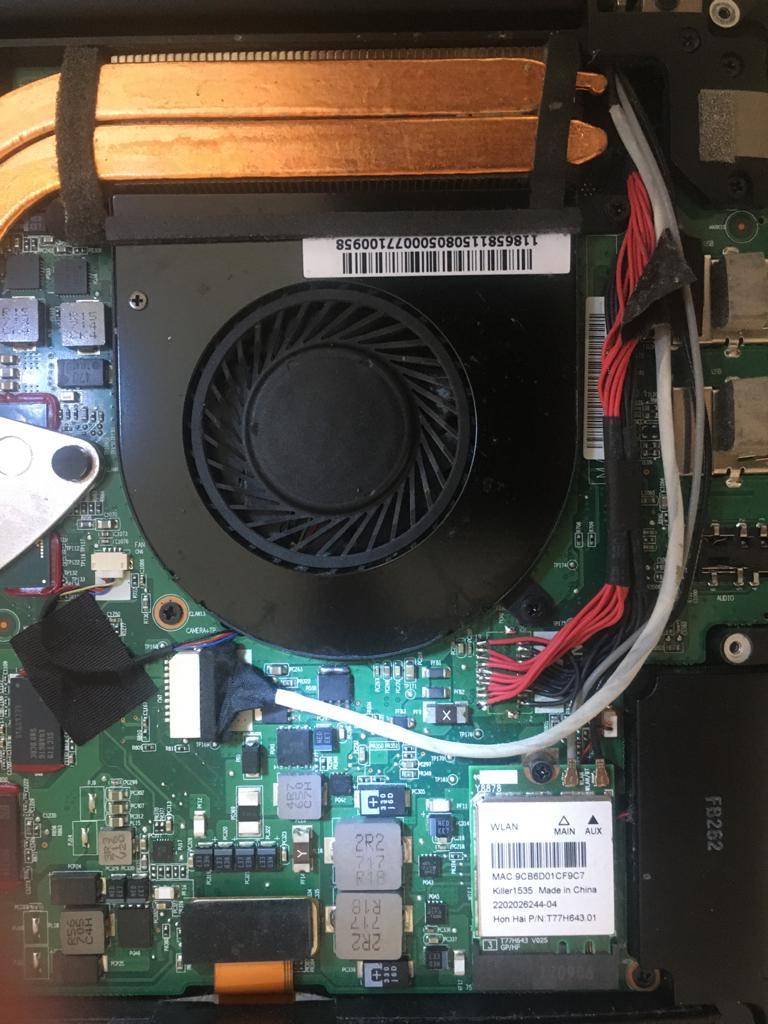 The laptop is a Razer Blade 14" (2017) with no touchscreen. It has a dedicated Nvidia GTX 1060 GPU and an integrated Intel 630 GPU. Only the Nvidia GPU's output goes through HDMI. I am not sure whether it is the monitor that's faulty or the integrated GPU but I did some tests where I set the dedicated GPU to be used globally in Nvidia Control Panel and ran Adobe After Effects: I'd still be getting same glitches followed by a black screen.

I unscrewed the laptop's back panel and noticed a few things there. One of them being that the laptop's battery is bloated at this point. Take a look at the pictures in this post and please let me know if you think you know what's wrong wtih it. I myself found a wire that was, I'm guessing, supposed to be soldered but it's hanging out. I also have to add that it's strange when the screen isn't always glitchy but it takes a few seconds either after a reboot or plugging out the HDMI cable (just counted and it took 30 seconds this time). 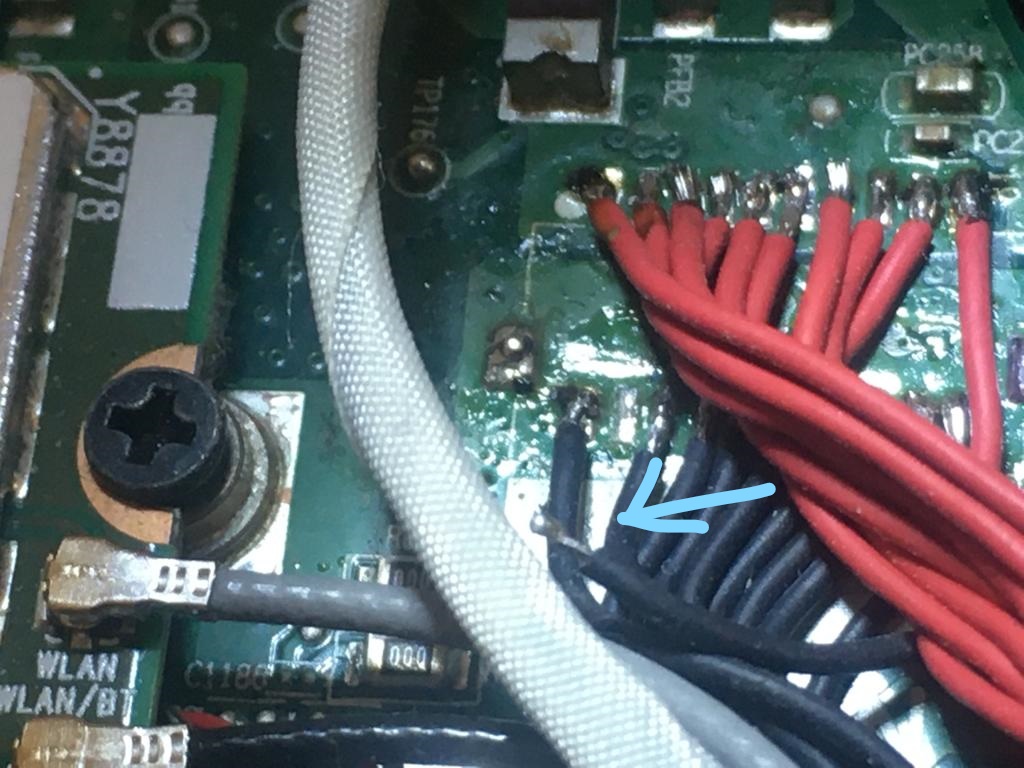 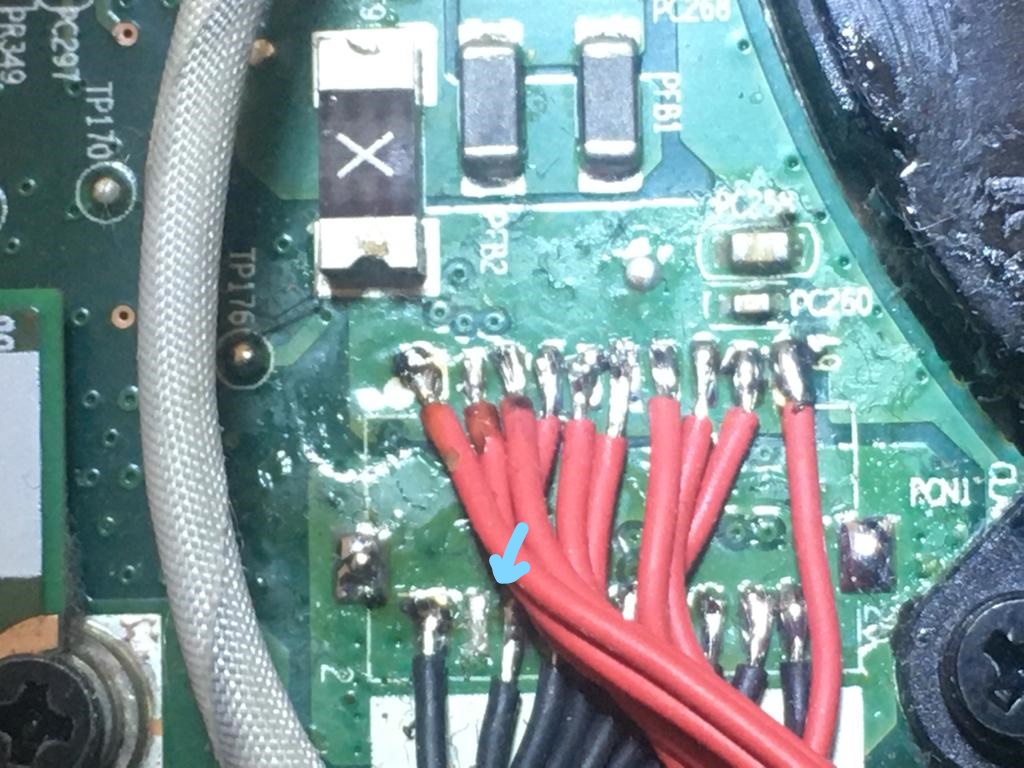 I had issues with charging before, it didn't charge at all. Apparently a piece inside had burned. I took it to a repair shop and I don't know what the guy did but you can see that there's something different between the images. This one was taken pre-repair: 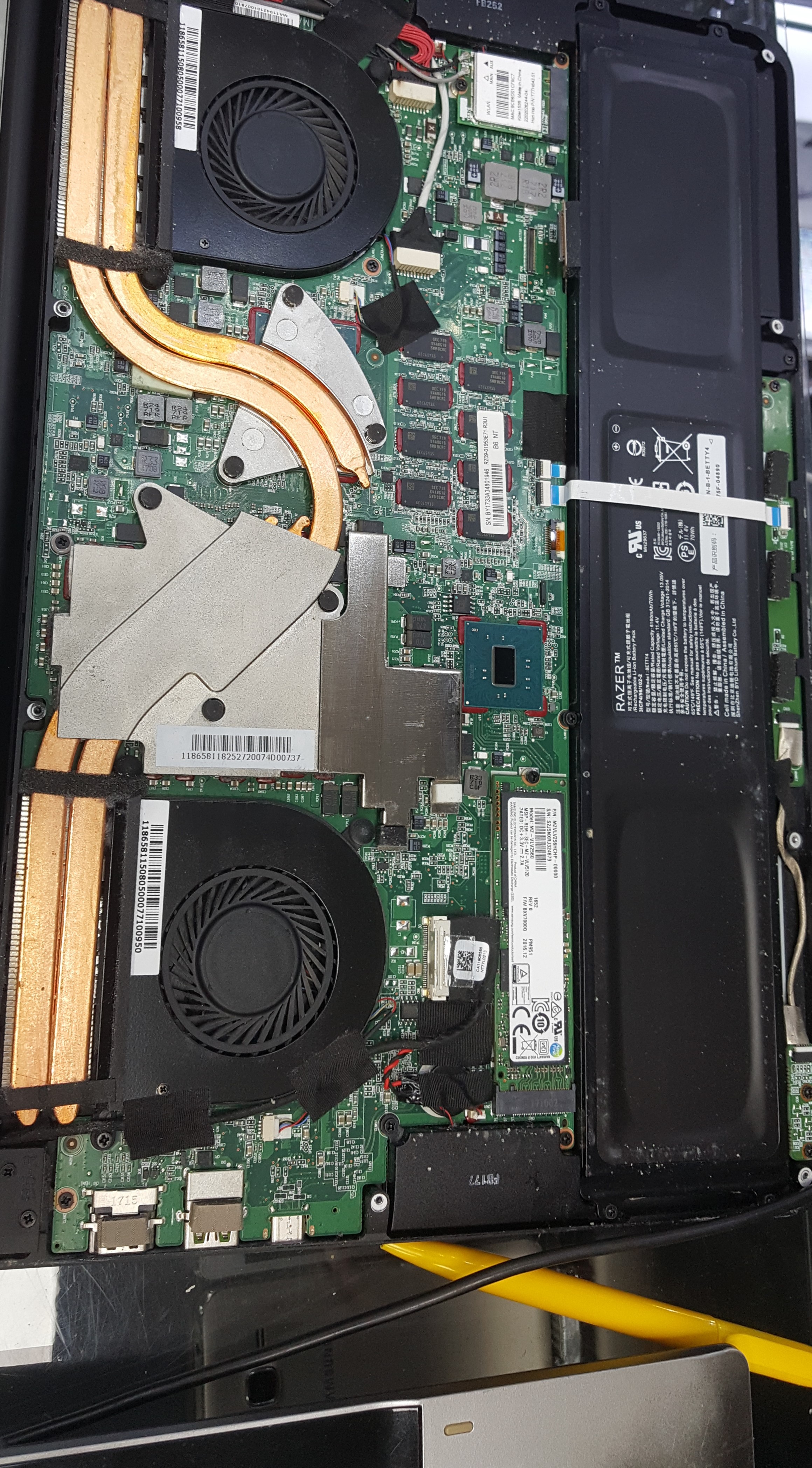 I think I found a related iFixit thread that says it is the DC-IN socket. Would it affect the screen? Is there any way I can make sure the GPU works fine?
You must log in or register to reply here.
Share:
Facebook Twitter Reddit Tumblr WhatsApp Email Link