Stardew Valley - Profession Guide: What’s Best and How to Choose Which Profession to Follow?

There are thousand guides out there about the skills and professions in Stardew Valley and you will either find walls of text or tables on tables about the things you get and lose. We thought to change that a bit, we are going to break down every skill profession so that you can just see the pros and cons. And then decide for yourself which one you want to follow because in the end it doesn’t matter what the guide says, you will have to choose for yourself because it’s a video game and only you can decide the way to play it.
Walkthrough:
There are 5 skills throughout the game which are namely Farming, Fishing, Foraging, Mining and Combat. Let’s divide these into their own sections so that you can pick and choose. Let’s first discuss farming since it is the biggest part of the game.
Farming:
The farming skill does not not depend on often you water the crops or how many seeds you plant, instead it is focused on how many plants you harvest. The quickest way to level up this skill is to plant crops that are on vines because those grow quickest and give you the chance of multiple harvests from the same crops. At level 5 of this skill you can choose from between the rancher and the tiller. The rancher gets a 20% price bonus to animal products whereas the tiller gets a 10% bonus to all the crops that they produce. At level 10 you can choose from the coop master and the shepherd if you chose the rancher and if you chose the tiller you get to choose from the artisan or the agriculturist. The coop master allows you to befriend coop animals quicker and cut the incubation time in half for all the eggs that you incubate. The shepherd befriends barn animals quicker and sheep produce wool faster for you. The artisan on the other hand gets 40% more money when they sell their artisan goods and crops grow 10% faster for the agriculturist. 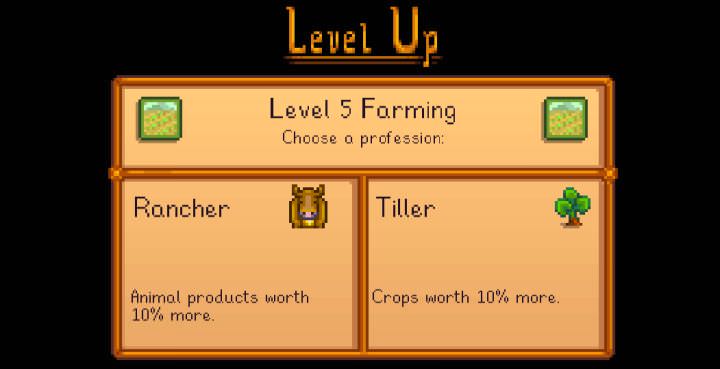 Foraging:
The foraging skill depends on how much you gather from what grows naturally. That means the items you find lying around like Leeks and Spring Onions as well as all the items you get from chopping down trees with an axe. At level 5 you can choose between the forester and the gatherer. The Forester gets 50% more money when they sell wood whereas the gatherer gets a 20% chance to get double items when foraging. At level 10 you can choose from the lumberjack or the tapper if you chose the forester and if you chose the gatherer you can choose from the botanist or the tracker. The lumberjack can get hardwood from any tree and the tapper gets a 25% price boost when selling syrups. The Botanist on the other hand gets the highest quality items when foraging whereas the tracker profession allows you to see the position of nearby foraging items. 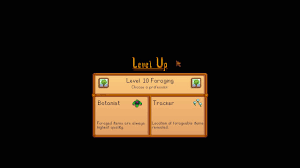 Fishing:
The fishing profession is very simple as it only involves fishing. It increases when you catch something or by harvesting crab pots. At level 5 you can choose from the fisher or the trapper. If you choose the fisher you get a 25% price boost when selling fish and if you choose the trapper then the resources required for crab ports are reduced. At level 10 you the option of the angler and the pirate if you chose the fisher and you get the option of the mariner or the luremaster if you chose the trapper. The angler gets a further 50% price boost to the fish that they sell whereas the pirate increases the chance to find a chest by 100%. The mariner gets no junk from crab pots and the luremaster does not need bait for crab pots. 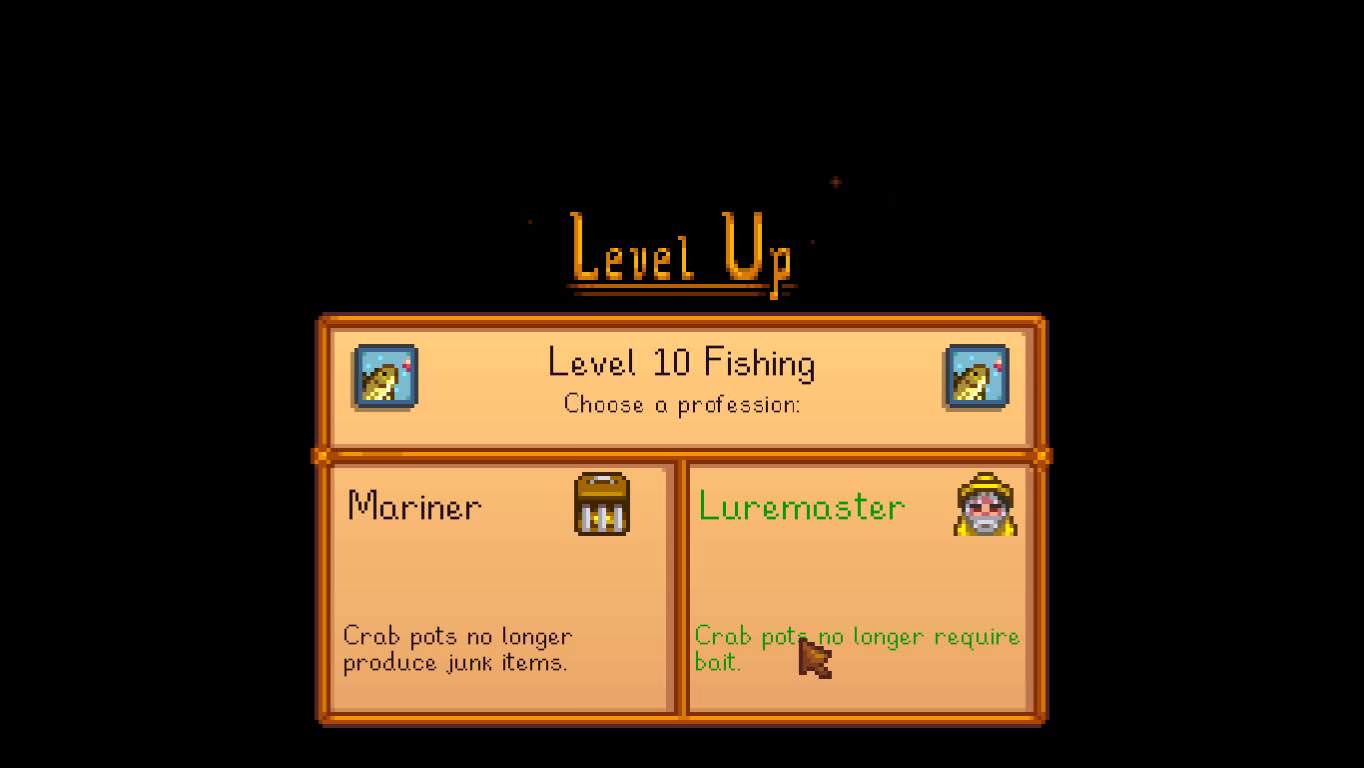 Mining:
The mining level increases when you destroy rocks or ore deposits. At level 5 you can choose between the miner and the geologist. The miner gets 1 more ore per vein whereas the geologist gets a 50% chance for gems to appear in pairs. If you chose the miner you could choose from the blacksmith or the prospector, if you chose the geologist however you can choose from the excavator or the gemologist. The blacksmith gets a 50% price increase in the bars that they sell whereas the prospector gets double the chance of finding coal. The excavator gets double the chance of finding a geode and the gemologist gets a 30% price increase when selling gems. 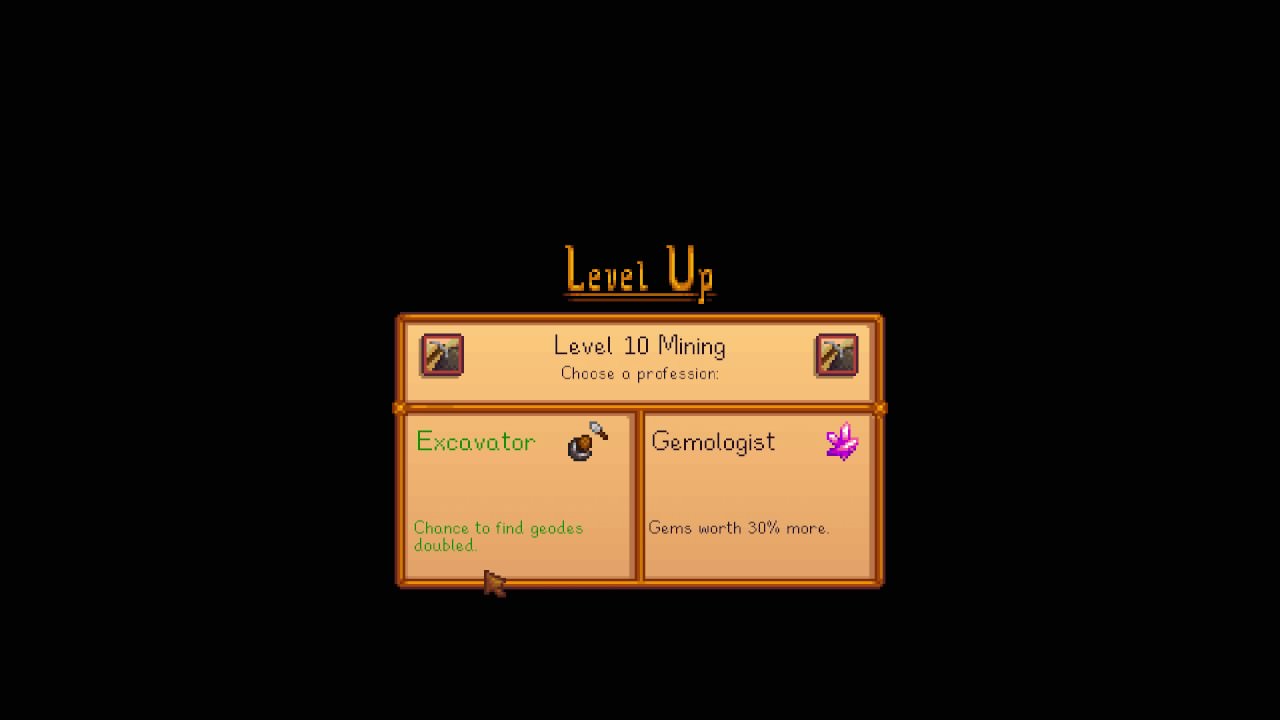 Combat:
This skill is levelled up by fighting monsters. The options at level 5 are between the fighter or the scout. The fighter deals 10% more damage and 15 more HP. The scout gets a 50% increase in critical strike chance. At level 10 you can choose from the brute or the defender if you chose the fighter and if you chose the scout you could choose from the acrobat or the desperado. The brute deals 15% more damage whereas the defender gets 25 more HP. The acrobat gets an extra 50% cooldown on their special moves whereas the desperado deals 7 times more damage with their critical strikes. 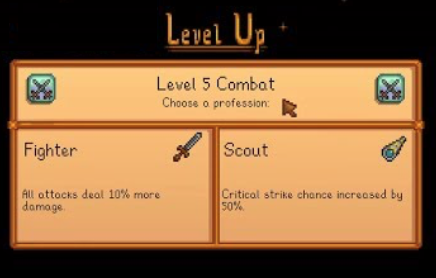