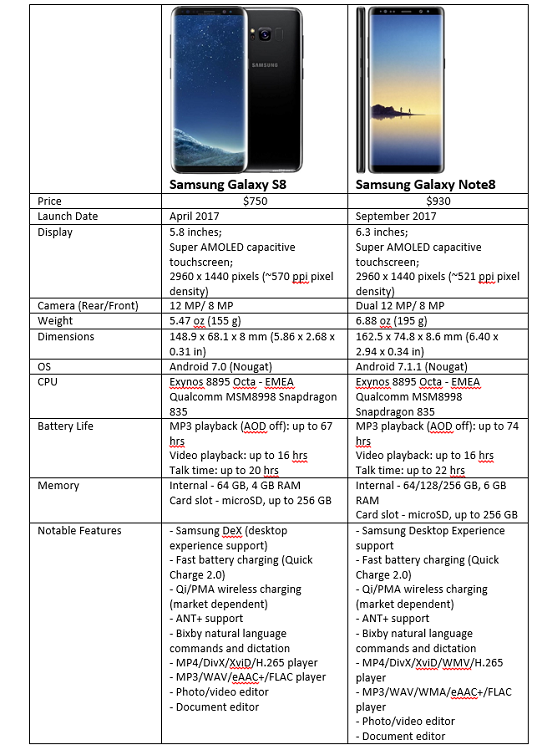 Samsung’s latest smartphone, the Galaxy Note8, is here, and you’re wondering if it’s worth upgrading from or purchasing an S8. Well, to help make your decision making a bit easier, we have presented a guide will quickly compare some of features and specifications the S8 and the Note8.

1. Display
Both the S8 and the Note8 come with Super AMOLED capacitive touchscreens with a resolution of 2960x1440. However, the S8 has a 5.8 inch screen which packs a pixel density of 570ppi as while the Note8 has a 6.3 inch screen with a pixel density of 521ppi. The Note8’s larger screen size means it packs less pixels, though this difference should be barely noticeable.

2. Camera
The S8 comes with a 12MP rear camera and an 8MP front camera with a f/1.7 aperture, 2x zoom, autofocus and image stabilization just to name a few. A very capable camera by any standard.
The Note 8’s camera goes a bit further with a dual 12MP rear camera, f/1.7 aperture for the wide angle camera and a f/2.4 aperture rating for the telephoto sensor. This allows for simultaneous wide angle and close up photography and also better photography in poor lighting conditions.

3. Performance
Both phones carry the same Qualcomm Snapdragon 835 processor, although, we can expect better performance from the Note8 due to its 6GB of RAM compared to 4GB present in the Galaxy S8. This would be especially when performing specific tasks such as multi-taking.

5. Features and Software
Both phone will have a lot of features in common, since they both operate on Android’s Nougat OS with Samsung’s own TouchWiz interface. The main feature that differentiates the Note8 from the S8 is the S Pen Stylus. The S Pen can be used to type notes, send Live Messages and translate text. In addition to the S Pen, the Note8 also includes a new feature called App Pairing. With App Pairing, two app can be displayed in a split-window mode allowing them to be used simultaneously.

6. Price
The Note8 is Samsung’s most expensive smartphone yet with a starting price of $930. The S8 currently costs about $750, making it almost $200 less than the Note8. A difference that is most likely due to the additional features and improved camera in the Note8.

7. Conclusion
It is no secret that the Note8 is Samsung’s most advanced smartphone yet. If money is not an issue and the slightly bigger screen size, 2GB extra ram, better camera and the S Pen features are enough to win you over, then the Note8 is for you.
However, if your budget doesn’t stretch that far, then for almost $200 less, you can get a near similar experience with the S8.