Sidebar
Previous Next Sort by votes
A

I have a Windows 10 computer and an Nvidia 1070 GPU. I have connected my 1070 HDMI output to my LG 75UM7000PLA TV via its HDMI 1 port. Thereafter the JBL 5.1 soundbar is connected by its HDMI (TV ARC) port to the TVs HDMI 2 (ARC) port. In the TVs settings I have chosen HDMI ARC as the sound output and I have sound.

The problem is when I go to Windows sound settings, then it appears that the computer is outputting 2.0 stereo as seen in this image: 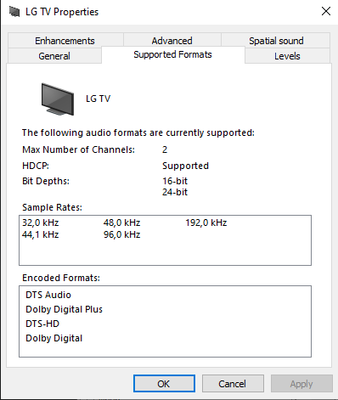 The same problem appears here, as I cannot choose 5.1: 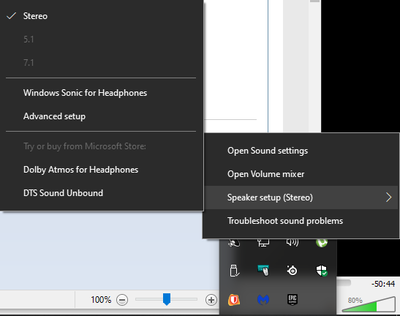 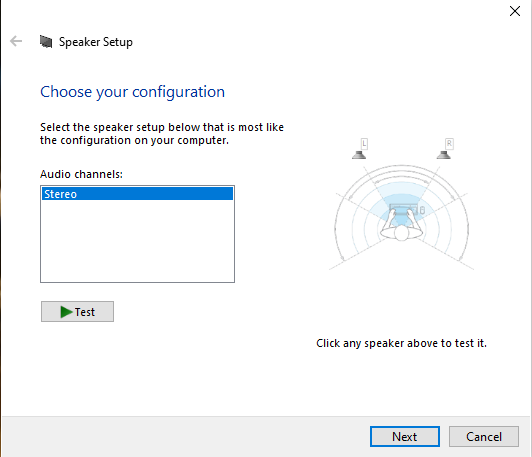 I have tried connecting my computer to the soundbar directly, hoping it would output a 5.1 signal that way, but then nothing works anymore and the given HTMI port becomes inactive (although it does still know what it is connected to).

Does anyone have any idea what to do here? I would appreciate some help.
0
A

The JBL would need an HDMI input and HDMI-ARC. You can't use HDMI-ARC like an actual input.
The PC is detecting the TV as a 2 channel audio device so you can't force it to output 5.1. There are HDMI input selectors with audio extraction. If the JBL has a digital input that would work.
0
A

americanaudiophile said:
The JBL would need an HDMI input and HDMI-ARC. You can't use HDMI-ARC like an actual input.
The PC is detecting the TV as a 2 channel audio device so you can't force it to output 5.1. There are HDMI input selectors with audio extraction. If the JBL has a digital input that would work.
Click to expand...

Thanks for the reply.

I'm not quite sure what you mean by "you can't use HDMI-ARC like an actual input", can you please expand on this? What I have done right now is connect the TVs HDMI port, marked with "ARC", to the soundbars HDMI also marked with "ARC" and this is actually how I have to connect it. No other ports work and this is what a tech guy told me to do (as I could even get the thing to work at all before).

Can you also explain what "HDMI input selectors with audio extraction" mean? I have no idea what that is. Is it some device? Could you give me an example?

As for what kind of inputs the soundbar has - it has 2 HDMI ports (one marked as IN and the other OUT TV ARC), which by the way is totally confusing to me, because apparently I had to connect my TV to that port labeled "OUT" on the soundbar and it actually appears to act like an input for it. I don't get it...

The remaining available ports are Ethernet, optical and USB. I'm guessing the Ethernet port is used to connect to devices like phones to stream via Google Chromecast or similar services. The USB port is, as far as I know, just to update the soundbars software (which I have not done btw).

As for the optical input, by TV does have an optical output, but right now I don't have an optical cable and I heard that optical can only support stereo anyway. Not sure though.
You must log in or register to reply here.
Share:
Facebook Twitter Reddit Tumblr WhatsApp Email Link