Hi everyone! I know, yet again another "TV not working with a computer" problem, sorry if you saw this a million times but I spent hours on the Internet looking for a solution. As a matter of fact, my problem is very similar to this post on another forum, which didn't receive a solution: https://forums.tomsguide.com/threads/hdmi-pc-detects-tv-but-tv-receives-no-signal.395870/

To keep it short: when I am plugging my HDMI cable from my computer to my TV, the computer detects the TV, I can extend the display and everything behaves as if I had two screens, but I can't see anything on the TV, I can't even switch to the HDMI port the cable is plugged in because there is no signal.

Five years ago I bought a computer with two monitors and a Samsung smart TV (model: UN40H5203). The two monitors always worked fine together, one plugged-in via DVI and the other via HDMI, never had any trouble with them. I seldom plugged my computer to the TV, but when I did I always managed to get it work.

Troubles started at the end of 2018 when I switched my graphics card from a Radeon R9 270X 2GB to a NVidia GeForce GTX 1060 6GB. The next time I tried to connect my PC to my TV, it didn't work. I ultimately managed to make it work by removing the drivers of the old graphics card, although I can't find how I did it again.

Now, a little more than a year later, I have the same problem. I don't know what changed since then. The weirdest thing is that I have a laptop with Windows 10 and an integrated chipset who works perfectly with the TV, as soon as I connect the HDMI cable the display switches immediately to the TV. In order to have my desktop detect the TV, I need to restart it, it doesn't seem to be able to detect it right away like the laptop does. I sometimes had to restart it as well when plugging the second monitor back in, although it generally detects it right away.

I tried getting everything up-to-date on my desktop: I updated the BIOS, the graphics card drivers, I even upgraded from Windows 7 to Windows 10 (I thought that might be the culprit since the laptop works fine), nothing changes. I plug the desktop with the same HDMI cable into the same TV port as the laptop. I tried changing cables and ports, same results.

The only difference I can spot between the laptop and the desktop is that the TV is detected on the desktop as a "Generic PnP Monitor", an audio input and output, but also as a"Digital Media Device" and a "Software Device", which doesn't happen on the laptop (it only appears as a "Generic PnP Monitor" and an audio input and output). Could it be an hint?

[Edit]
It turns out that the name I could see in the Digital Media Device and the Software Device sections is the name of my TV on the Wi-Fi network. If I disconnect my TV from the Wi-Fi, it doesn't appear there anymore. I still don't understand why it wouldn't appear on the laptop, maybe it's about the laptop being on the Wi-Fi while the desktop is on LAN, but I don't see why it would be that way since the TV is on the Wi-Fi. Anyway, I guess we can ignore that.
[/Edit]

Is the TV´s firmware up to date?

Use DDU uninstaller to remove all graphics drivers and reinstall the latest from nvidia.com for the GTX1060

The TV´s source is set to the correct HDMI port?

The cable you are using is a straight HDMI to HDMI cable, or do you use some sort of an adapter?

Is only the TV connected or the two other monitors as well?

helpstar said:
Is the TV´s firmware up to date?
Click to expand...

Oh yes, I forgot to mention that in the list of updates, I indeed updated the TV's firmware to version 1210 in the process.


helpstar said:
Use DDU uninstaller to remove all graphics drivers and reinstall the latest from nvidia.com for the GTX1060
Click to expand...

Done. No change. Would that software detect drivers from my old Radeon card? As I said in the original post, they're supposed to be gone but I had trouble with that earlier.


helpstar said:
The TV´s source is set to the correct HDMI port?
Click to expand...

As it turns out my TV doesn't let me select a source that doesn't receive a signal.


helpstar said:
The cable you are using is a straight HDMI to HDMI cable, or do you use some sort of an adapter?
Click to expand...


helpstar said:
Is only the TV connected or the two other monitors as well?
Click to expand...

These are indeed the resolution and refresh rate used. I tried a couple others, it still doesn't display on the TV.
0

Did you use DDU uninstaller for AMD and nvidia drivers?
0
K

Back in 2018 when I first had the problem, I didn't use DDU, I don't remember what I used but I think it involved entering command lines.

I tried yesterday to remove AMD drivers (after removing NVIDIA drivers) by selecting AMD in the drodown, but given that the software detected that I had a NVIDIA GPU I am not sure it did anything.
0

Did you restart windows after that and reinstalled the latest nvidia driver?

Is the GPU installed tightly into the upper 1st PCIe slot?
Also some cable tend to not fit perfectly into the slots, either into the GPU or TV

Did you plug in the HDMI to the correct HDMI port? not into the motherboard but into the GTX1660?

I am now sure it comes from the graphic card: as a test, I removed the GTX 1060 and replaced it with my older card, and I was able to connect to the TV without even having to update the drivers. What could cause this?

As for the cable not fitting perfectly, I indeed noticed that the HDMI cable doesn't seem to completely fit into the port on my computer because of the computer's case. There's a sort of bar on that edge that collides with the HDMI plug and that prevents it to go all the way in. I don't have "problem" with the Radeon because the port is a little bit further away from the edge. Is that a problem, given that I am able to plug my monitor through this HMDI port?

Here are pictures I took in each situation: first one is with the Radeon in the computer, second one with the NVIDIA. 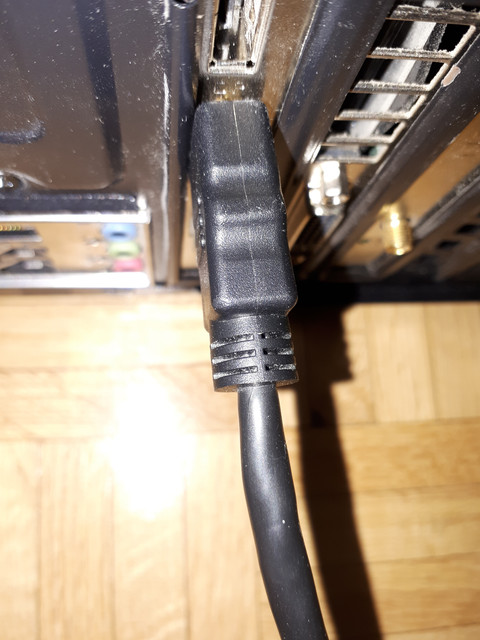 Try a different HDMI cable with a thinner plastic plug or if possible, unscrew the GPU inside the case and move the card slightly down, so the HDMI connector can fit better.

I'll try that, but it seems I broke something when changing my graphic card, I can't see anything anymore, there's no signal at all, even when I plug a monitor to the motherboard with the D-SUB cable that came with it. The LEDs on top of my computer aren't lighting up anymore either, but the ones on the bottom do. The computer still does the same noise as it used to, so not everything is broken I guess, but I have no idea how to find what actually broke.
0

did you connect the power supply to the GPU?