Which Pokemon Go Team is the Best?

Which team you join in Pokemon Go is completely subjective and should really be chosen just based on which of the three gym leaders you like to opening speech of better. There is no real such thing as the 'best' team. As of right now you don't get any specific perks or extras from being one team over another, so go with whatever team sounds the best to you. That being said though, there has been a lot of speculation from those opening speeches that there may in the future be perks added to the different teams as the game rolls out new features.

Yellow Team - Instinct
"Pokémon are creatures with excellent intuition. I bet the secret to their intuition is related to how they're hatched. Come and join my team. You never lose when you trust your instinct!"
The yellow team focuses largely on hatching eggs and caring for their pokemon, they are largely viewed as being the middle ground between the other two teams. They are also the least numerous of the three teams, which can actually be a good thing I find, as most of the gyms around you are going to be either blue or red most of the time, so you'll pretty much always have a gym to attack, and taking over gyms is a good way to gain experience. The legendary bird pokemon Zapdos is the mascot of this team.

Team Blue - Mystic
"The wisdom of Pokémon is immeasurably deep. I'm researching why it is that they evolve. My team? With our calm analysis of every situation, we can't lose!"
The blue team is the most popular of all the teams wih the most members worldwide. This makes them good if you are interested in leveling up your own teams gyms, and can be beneficial if you are planning on holding a high level gym for a long period of time. Their motto focuses more on the evolution of pokemon and the hidden strength that evolution unlocks in the pokemon. The blue team's mascot is the legendary bird pokemon Articuno. 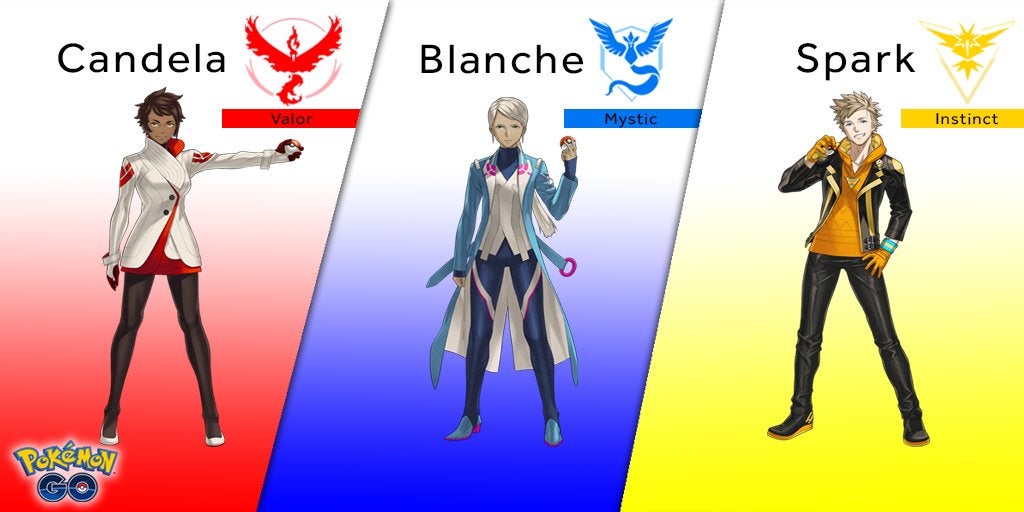 Team Red - Valor
"Pokémon are stronger than humans, and they're warmhearted, too! I'm researching ways to enhance Pokémon's natural power in the pursuit of true strength. There's no doubt that the Pokémon our team have trained are the strongest in battle!"
The red team are all about unlocking the natural strength of a pokemon through rigorous training, they aren't so much concerned about evolution or hatching new pokemon from eggs, just in training them once that happens. For population they are in the middle ground, having more members than team yellow, but not quite as many as team blue. They do get a bit of a reputation for being the more hot headed of the teams due to their motto of using brute strength to achieve their goals. The red teams mascot is the hot headed legendary bird Moltres.