Cracking sound when shooting a video

I've recently had a problem with the touch screen, I couldn't shut the phone and I looked for a little hole because my old tablet had one to shut the phone down. I've found one in the back, then I stuck a needle in it. (Probably was a bad idea because it didn't do anything.) 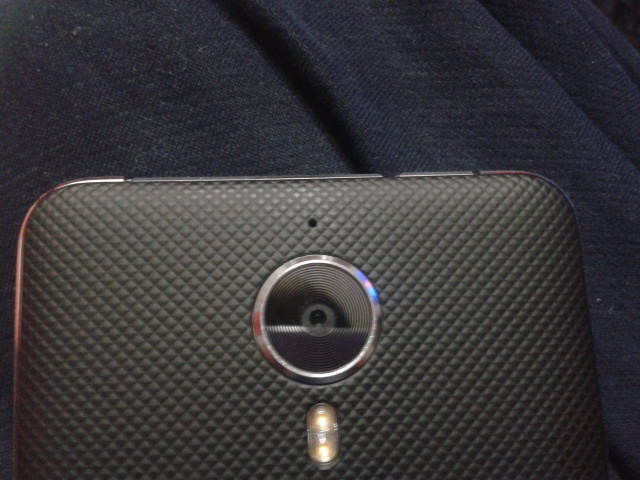 (That little hole there above the camera)

First question is, what is that hole for? Because after doing what I did, I've encountered a problem. Normally when I record my voice or send a voice message via WhatsApp (without headphones) there is no problem in the sound. But when I shoot a video, there is constant clicking noise in the background. Weird thing is, while using the app PowerCam that sound isn't there. The stock camera app and other camera apps on the play store has the same problem.

If you watch this video with headphones, you'll hear the sound I'm talking about (it's just a 5 second video to show you the problem)

I've tried clearing all the data in the camera app. I tried the airplane mode because some people said that the signals may be causing that noise. I tried blocking, blowing that hole while shooting a video - none of these things helped.

Now my theory is, new phones use something called noise canceling microphones to cancel out the background noises, such as car noises when you're in a traffic. And that little hole right there, is that microphone - along with the primary, normal microphone on the bottom. The reason why I'm asking you is I'm not entirely sure about the cause of this problem. It may be related, or it may be something completely different.

So, could that little hole be the noise canceling microphone? If so, I'm probably going to have to send my phone to get it repaired. But I just want to make sure that this is the cause of the problem because as you know, this process will take a lot of time. Probably like 2 weeks to a month. And if that hole right there is not the problem, I would be just waiting a month for no reason.

If you know about smarphone hardware, please let me know what that hole is for. Because in my previous videos I didn't have that noise. I'm %70 sure that this is the cause of that noise.

Thank you in advance.
0

That was a mic. You may well have damaged it.