Is it possible to upgrade an ASUS K55VJ laptop to 16 GB? Internet says yes, ASUS says no

Previous Next Sort by votes
C

My ASUS K55VJ came with 6 GB installed. I'm looking to upgrade to 12 GB at least.

Two slots for RAM are available and both are occupied (photos of my dusty RAMs), a 2 GB: 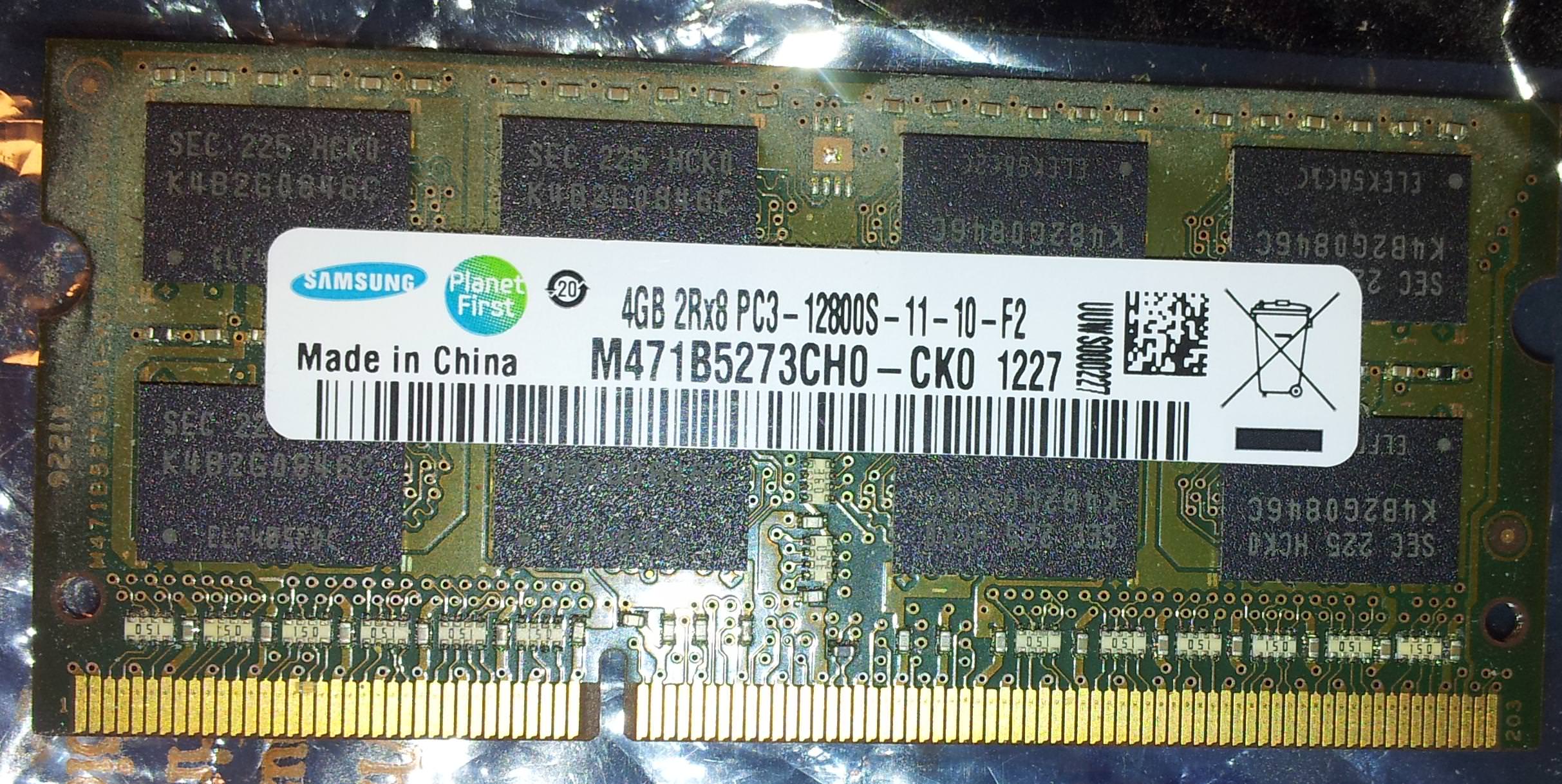 As the title says, ASUS specs states 8 GB is maximum. And yet here is a video of a person claiming to upgrade from 6 to 12 GB by replacing the 2 GB with an 8 GB stick.

These screenshots from the Youtube video are pretty convincing that it would work. Especially since the PC is exactly the same as mine (another ASUS K55VJ) except for a "Windows 10 Pro N" 64 bit OS instead of my "Win 10 Home" 64 bit OS (everything else exactly the same).
"This PC -> Properties": 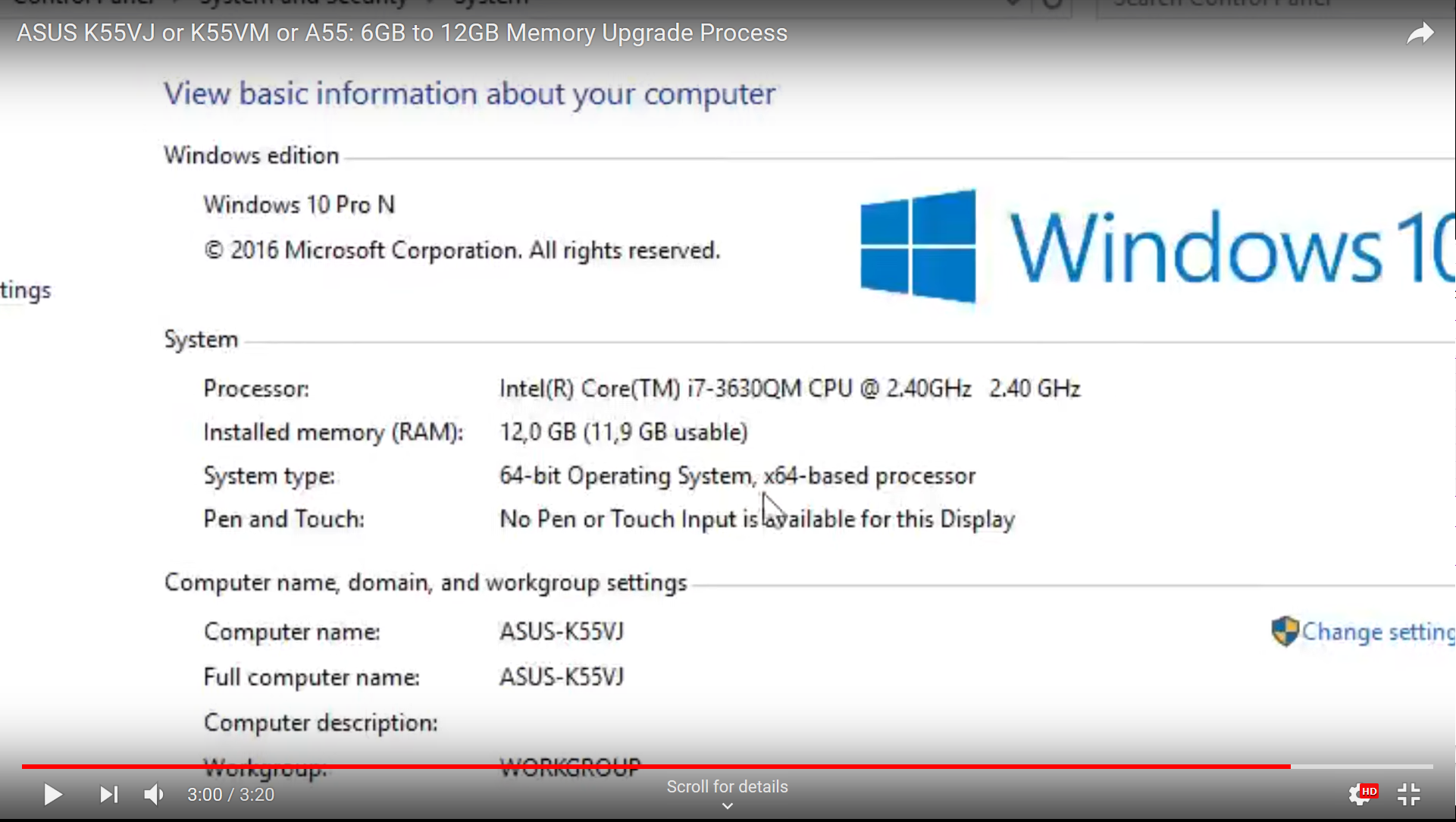 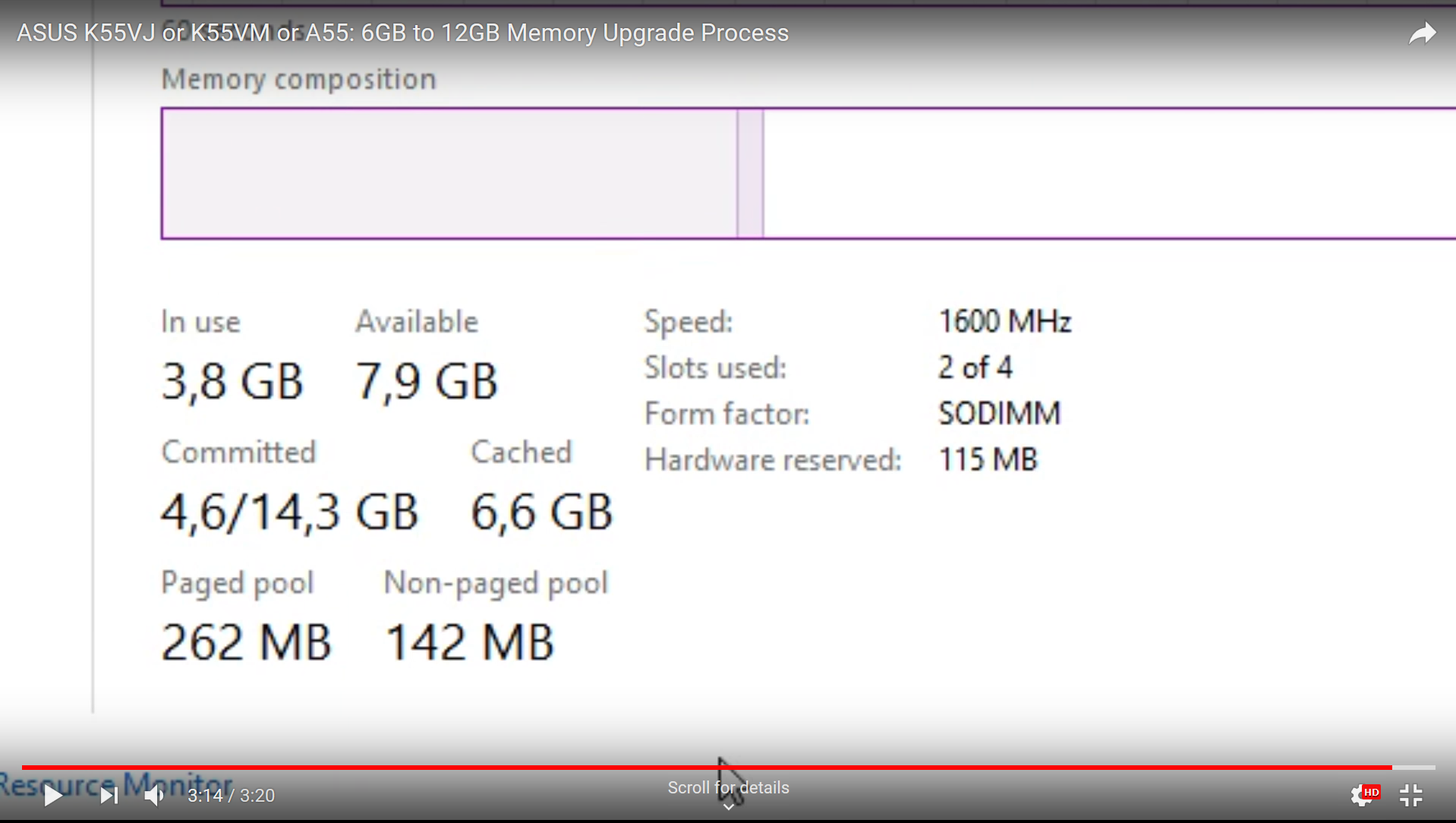 Interestingly ASUS states max 8 GB for K55VD model but this retail seller claims the K55VD has a max of 16 GB (it's swedish, choose "privatperson" on the popup and search "16 GB" or "Max. RAM-minne").

In this old thread someone claims even 32 GB should be possible for an ASUS K55A (I'm assuming perhaps erroneously that all K55xx models are similar) because systems tools like SIW says it can. Another person in that old thread says the CPU can handle 32GB and the "Intel® Chief River Chipset HM76" can also handle 32 GB. Unfortunately the OP in this old thread never reported back if it worked or not.

I think I'm happy enough getting 12 GB total by switching the 2 GB for an 8 GB (exactly like in the video above).

I'm looking for anyone that confirm this can be done or that it cannot be done.
I endeavored to be as precise as I can, giving links to references. Thankful for replies.

PS
Also I think the memory speed is 1600 (or PC3-12800). This is the memory speed I need to purchase and there is no point getting faster memory sticks (I have no plans to overclock or even know if it's possible). I think the ASUS website states 1600. Is 1600 speed correct? Some other place I can't find again names the motherboard itself as just "K55VJ", no more, no less characters as designation.

For anyone who cares. It worked, or so it seems. System now reports 12GB just as in screen shot above.

Edit. It works just fine. 12 GB available and usable. So with with 8 Gb + 4 GB installed in the 2 available slots it obviously could handle 16 G (if both were 8 GB).

Not worth it the investment for me even if it did work (I think it would work). Given a cheap second hand 16 GB, I would test it. But given the now dated and inferior graphic card it is not worth investing any more into this laptop for me (no matter how much main board RAM the graphic card (2GB Nvidia GT635) will not perform better).

Wisdom acquired along the way. Don't worry about DDR3 voltage marking. Every DDR3 will work in a DDR3 slot whatever it's voltage marking.1.5 Volt is defined as DDR3 standard, an 1.35 volt or whatever will work fine, it's built to be able to take 1.5V.

But mind the difference between laptop DDR3 RAM (SO-DIMM) and desktop DDR3 RAM. They have different form factors and are not interchangeable.

I remember when TOM's Hardware was a new 'hot' site for hardware in the early 2000's. Now finally 15 year on I registered.
How come it's much easier finding an old post (last week) of yours googling it, rather than through the account?

Why do I get a faceful of bullshit advertisement the moment I log in instead of staying at the forum?
0

The RAM voltage does matter. It may have worked in your case, but not always, especially systems made to use DDR3L, they are not likely to boot or be stable on regular RAM. I have worked on may systems that did not boot on the wrong type of RAM. Going by the Crucial site is usually safe, I can't think or more than one time I have seen them not be correct. You don't really want to run on two different size RAM, unless you are actually at full RAM usage often, two 4 GB sticks running in dual channel mode is better than having 12 of different sizes.
0
C

I have DDR3 not DDR3L: https

Otherwise I went by this and wikipedia DDR3:

1.5V is the JEDEC standard for DDR3, therefore you will never fry a module at this voltage.

Crucial refers to this as Dual Voltage: In the past, most DDR3 memory voltage ranged from 1.5 - 1.65v. More recently, dual 1.35/1.5 voltage modules came available at Crucial.com. The dual-voltage module will run only run at 1.35V if your specific system supports that voltage, otherwise the memory will run at 1.5V.

Kingston: As DRAM manufacturers shrink their dies and/or increase their yields of DDR3L, they soon reach a point where the majority of their DRAM output becomes DDR3L or dual-voltage, handling 1.5V or 1.35V voltages.

DDR3L (low-voltage DDR3) is just an "extension" of the DDR3 standard, so companies has to be aware that plugging a module will default to 1.5V on most systems. At 1.5V, the worst that will happen will be a waste of electricity/battery.

RAM modules contain pre-defined configurations (SPD, XMP, etc.) but the default one is often safer value that will work on as many systems as possible. For compatibility purposes, that setting might not be factory-set to 1.35V, but 1.5V instead. The default timings can also be different and slower from the ones indicated on your module package (I have an other answer on this topic).

For this reason, there's no chance it will overclock by itself even if it's running at a higher voltage (unless your current BIOS settings are manually set to run at specific speeds higher than your new modules would support - if so, reset your memory settings to AUTO before installing them).

If your RAM contains a XMP profile, try that as it can be factory set to 1.35 and all ideal settings - but you still have to select it manually in the BIOS.

In conclusion, 1.35V is perfectly safe. It's still always a good idea after installing RAM to go in the BIOS and verify/adjust the settings to ensure they match the module packages and perform optimally.
Click to expand...

two 4 GB sticks running in dual channel mode is better than having 12 of different sizes.
Click to expand...

Yes, I've heard that from ASUS customer support. But ASUS K55VJ comes from factory with 4 + 2 GB installed, so it was already asymmetrical. I wanted minimum 8 GB as per a game requirement. Found this 8 GB stick cheap second hand so now I'm running 4 + 8 instead of 4 + 2. Not a big difference now actually, graphic card is limiting fps, but at least I don't have to watch RAM hitting the roof in Task Master. Given that the game (DCS) wants up to 32 GB I was surprised it ran at all with 6 GB.
0
H

I would like to upgrade the memory too. I asked Asus if K55VJ supports 16GB RAM and they told me that it can handle only 8GB. But on Asus global site in specifications it says "DDR3 1600 MHz SDRAM, 2 x DIMM socket for expansion up to 8 GB SDRAM". I think it means that ONE slot can take up to 8GB RAM .... but I dunno, it says it can take DIMMs ... LOL ... so I don't know if I should trust the ASUS support team anymore. They just read it and tell you what you've already read .... shame.
0
C

I know for a fact K55VJ can handle 8GB in one slot because mine does ( so does the guy in video above, he claims and shows K55VJ can have 12GB (which must mean 8 + 4, same as I have done)). I found and used specifically the "CT102464BF160B" from Crucial as I mention above. Inside the slot with RAM removed it says 1.5V. It's faint but visible. 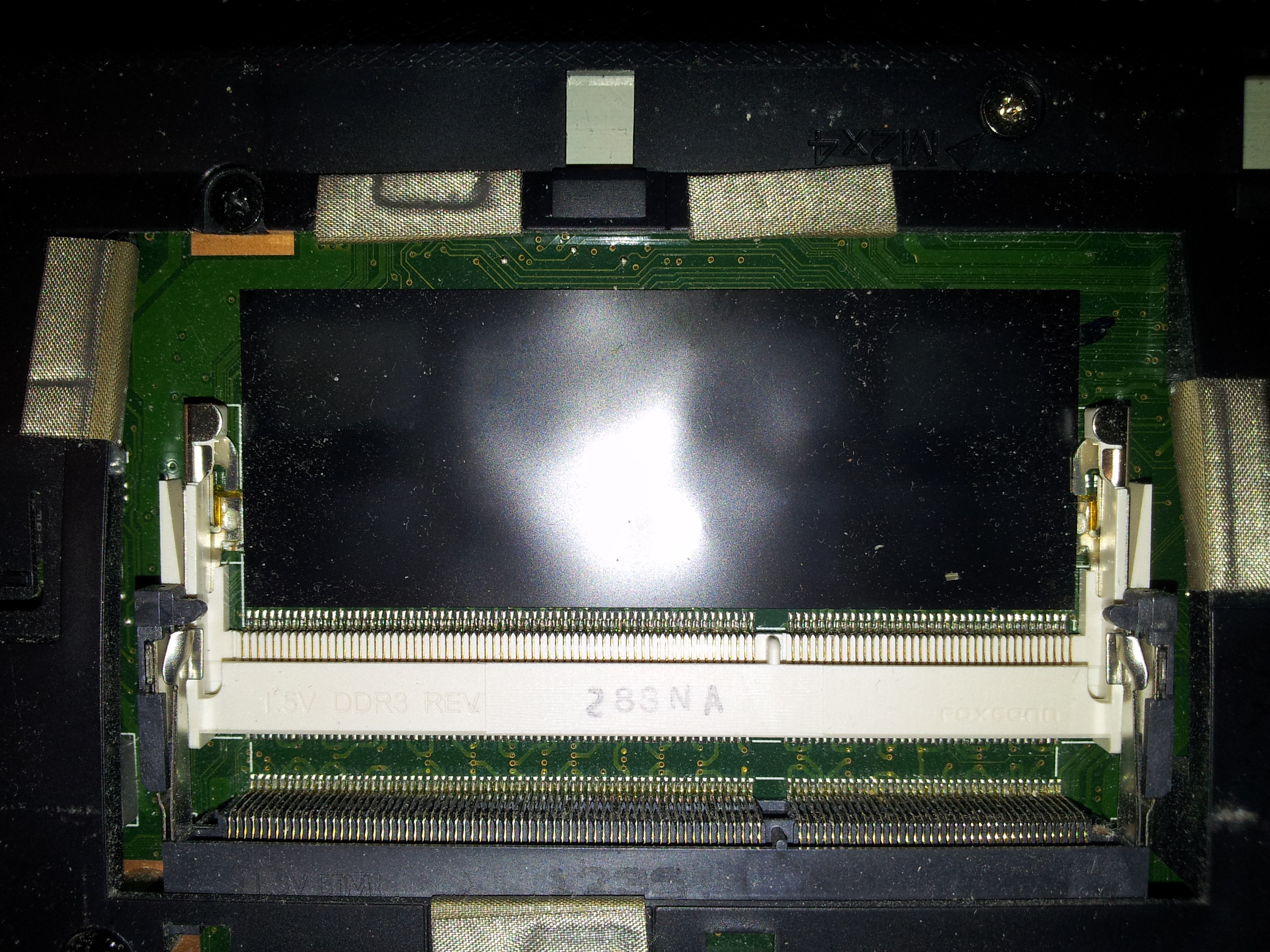 As I understand it (and mentioned above) the DDR3 standard specifies 1.5V which means any DDR3 laptop memory should work. Many memory makers has since improved their process and make 1.35 V memory instead/as well as 1.5V and call it "DD3L". But DDR3 by definition of the standard must work at 1.5V so memory makers ensure that 1.35V works in 1.5V slots. Crucial call it "dual-voltage".

The memory I found second hand "CT102464BF160B" is a Crucial "dual-voltage". Without looking it up again (link to crucial is above) I've installed a "DDR3L" memory in a DDR3 slot and it works.

One advantage of DDR3L can be room for overclocking. But don't, just don't. It's strongly recommended against overclocking of laptops in general because of cooling. My K55VJ has shut itself off because of overheating twice fully standard (must have been overheating, cvan't trhink what else it could have been). I wouldn't and think it would be stupid and asking for it to try to overclock.