Previous Next Sort by votes
S

I have a RCA Voyager tablet. A very suspicious firmware update screen came up. See image below. I hard reset the device by rebooting using the power/volume up button. During the initial setup, it connects to wifi, then looks for updates and the same screen shows. up. The same screen also shows when going into settings>System>Firmware updates. It currently says it's "Updated to Android 8.1.0. After trying a few things, I tried actually clicking the update button, which looked like it was making updates, but the same problem occurs after a restart.

Anyone have any ideas? I feel like there's no way it's legit, but can't get rid of it even after a hard reset.

In case image doesn't show up, it says:

*
Firmware Update
An update has been found!
Your tablet is ready to get even better with this upgrade which will provide the latest features and improvements. Please be patient as the tablet receives a system software update. Upgrade package version 1.25.109 Size: 13.92MB

Critical Update Available:
This is not a drill we gottem bros turn around, someone is watching you if not then go outside and take a sh*t
Dont Stop
For more information, visit www...../updates, which is a dead link.
** 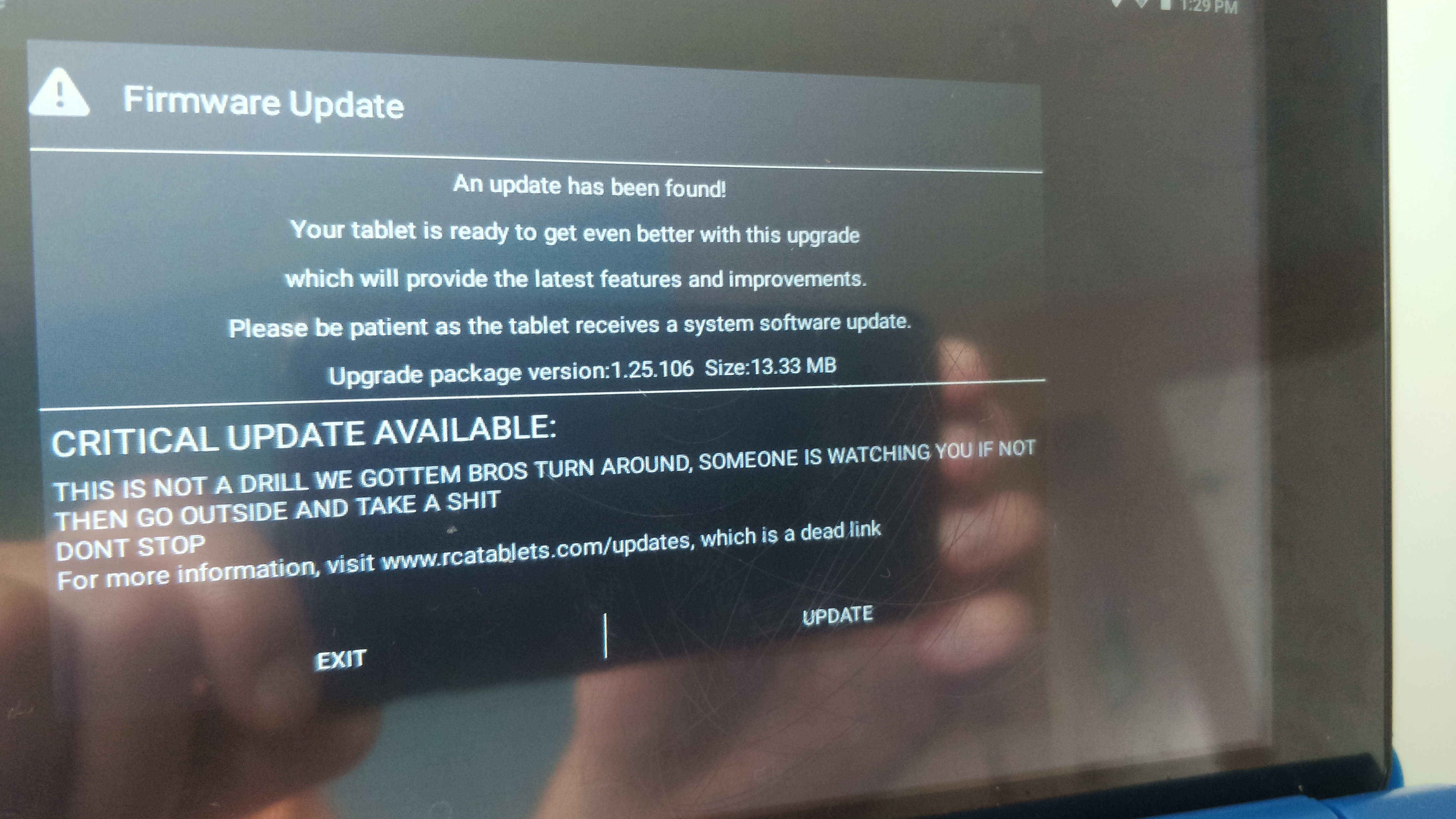 So I've had the same question when this happened and just didn't update thinking there'd be a new update with some sort of explanation. Cut to yesterday, a new message appeared:

I reached out to support and they said this:

Followed their instructions, spent hours backing up my data and redownloading it and the message still pops up. I've had and used RCA tablets since 2016 and never had something like this happen before. Personally, I'm looking into getting a new tablet, their response of "it's a virus" doesn't sit well with me. The fact that their own updates url isn't working tells me a lot about how much they care about their customer's cyber security.

(Sorry for any bad formatting, I'm new but I wanted to share what happened so any future readers need an answer.)
Last edited: Jul 6, 2021
0
D

I have an ONN tablet that is doing the same thing!! I scanned for viruses and malware and haven't found any on the tablet. Did a factory reset and the message came back.
0

Folks, these issues, as previously stated, are likely malware that is introduced by the websites you are visiting. This is not a firmware/legit update issue.
0
D

If that was the case, wouldn't a factory reset fix that? Also, as I stated above,, I ran malware scans on it and they came up clean.

Dg2021 said:
If that was the case, wouldn't a factory reset fix that? Also, as I stated above,, I ran malware scans on it and they came up clean.

Not if users are still visiting the same sites afterward. I assume you restored your previous backup, where the malware/link could still lurk.
0
D

COLGeek said:
Not if users are still visiting the same sites afterward.
Click to expand...

I haven't visited any websites since the factory reset.
0
D

Oh I see. I did restore from a backup. I will try another factory reset and delete all backups and see if that does it. Thank you for your input
0

Any luck getting rid of this message? It's not from websites being visited. I have this on several RCA tablets that are used internally for a single internal app and never browse the web or anything else. Factory reset and the pop-up comes right back immediately. Found discussion on Reddit related to this: https://www.reddit.com/r/tablets/comments/ogl6j5 View: https