I have a big rooftop antenna that looks like it was installed a while ago. I've only owned the house for a year and I've never been on the roof so I don't know much about it. Don't know if it's powered. But it's big. Plenty big to pick up all the stations from LA (tower is ~25mi away). 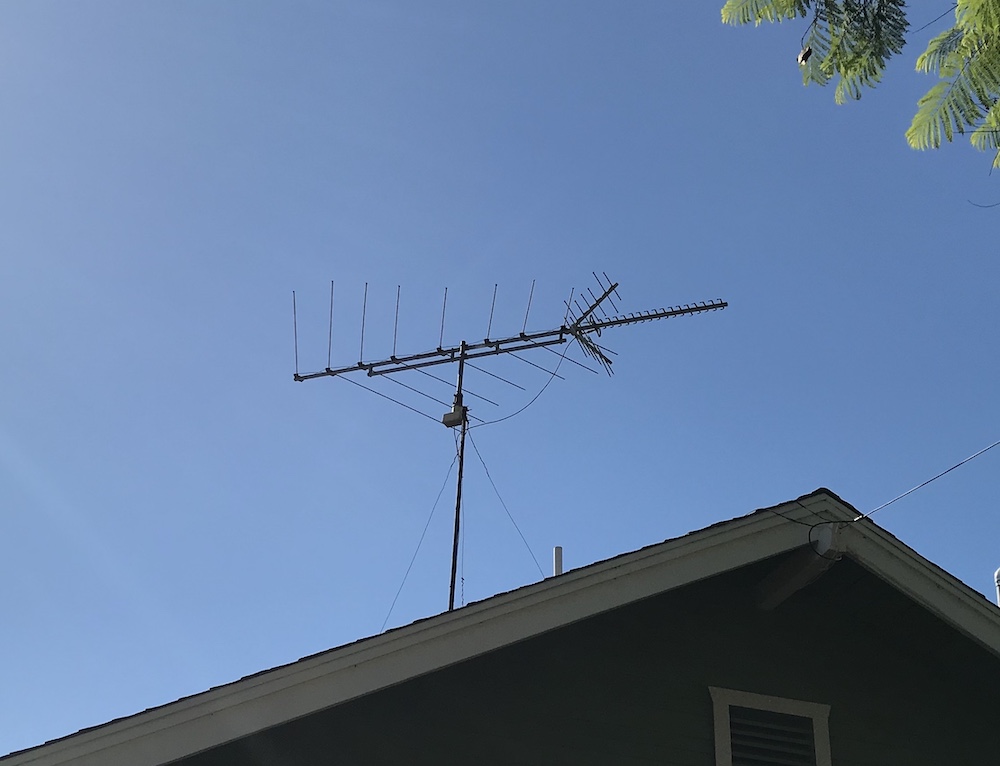 When I first moved in, I was able to get all the channels I should get. A few weeks ago I noticed about half the channels are just black. Same problem on two TVs in different rooms. They're separate runs because the connection in my living room actually goes outside under the eave and then comes into the living room wall from outside. So I assume the individual runs are fine, and my first thought is either the cable that goes from the antenna to a splitter, or the splitter itself.

But before I tackle any of that I want to make sure I understand what the setup probably is. I've never set up an antenna, don't know how it's usually done. I assume I've got one coax cable coming from the antenna, and then into my attic (There's a cable coming off the roof and going into an attic vent). Then I assume somewhere in the attic is an old splitter box that sends runs of coax off to each room in the house (and probably sends one back outside to go around the house for the living room). Is it more likely there are 2 splitters, with one sending signal (1) under the eave and (2) into the attic, where it hits Splitter 2 and is distributed to the bedrooms?

I ran Cat5 under the house and there is a ton of coax down there. I always assumed that was retrofitted coax for cable TV, which we don't have. I did try connecting the coax from under the house to a TV at one point, and got no signal. I'm praying that has nothing to do with the antenna because I never want to go down in that crawl space again.

Just hoping someone can tell me if I'm going in the right direction or not. I don't really want to go up on the roof, or in my tiny attic, if there's no reason to. Thank you!

Is it pointing in the general direction where it's supposed to? These things, there may no way to avoid the crawling.
L

Happened to me also. Check the website below. Some stations are moving to new frequencies. Explanation on website, but all I needed to do was rescan.POW! Everything back.

lhyde10755 :
Happened to me also. Check the website below. Some stations are moving to new frequencies. Explanation on website, but all I needed to do was rescan.POW! Everything back.

BINGO! Thank you! How did I miss this news? None of my channels had any updates on their website and then buried deep on the local PBS site was one page about having to rescan this past June after an FCC frequency auction. Thank you for saving my a trip to my roof!
You must log in or register to reply here.
Share:
Facebook Twitter Reddit Tumblr WhatsApp Email Link